The Changing Landscape of the Sport Event Industry 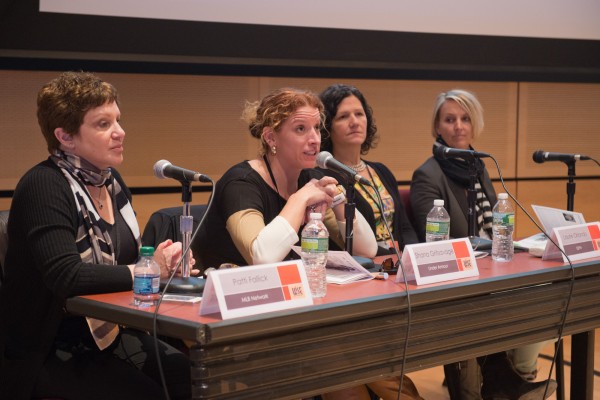 Panelists at the symposium, “A Word to the WISE: Testing the Limits,” discussed how students can prepare for the changing landscape of the sport event industry. Photo by Steve Sartori

Leadership. Tenacity. Resourcefulness. Students looking to find success in the constantly evolving sport event industry had better come to the field prepared with confidence and those attributes that will help them stand out in the crowd.

“It takes a lot of endurance to be in the business,” said Shana Gritsavage, director of global events for Under Armour. “We don’t rest very much—particularly in a fast-moving brand that’s nipping at the heels of the big guys.”

Gritsavage was one of eight leading professionals from the industry who offered advice and discussed the current state and future of sport events as part of “A Word to the WISE: Testing the Limits” symposium April 9 in the Joyce Hergenhan Auditorium, Newhouse 3. The second annual event was organized by the Syracuse University chapter of Women in Sports and Events (WISE).

Starting the discussion, moderator SU alumnus Dennis Deninger, professor of practice in Falk College’s Department of Sport Management, said interest in traditional sports and sports events continues to grow, with new networks for various leagues and teams, and attendance remains strong. In addition, 23 percent of all ad dollars spent last year in the U.S. were spent on sports. “This is a significant business that our people are involved in,” said Deninger.

Add that growing interest and revenue to a new wave of events that are changing the landscape of the sports industry. “This raises significant questions as to the impact on the future of sports events, and the consumption, distribution, marketing, sponsorship and branding of sports product,” he said.

The opportunities are out there for students willing to work hard, with the ability to differentiate themselves from others. “One thing you can do to separate yourself from everybody else is really to develop some skills,” said Deane Swanson, director of content, ESPN Global X Games. Those might be computer or design skills, CPR certification or even heavy equipment operation.

Having a passion for the work also matters. “If you do love what you do and you have a passion for it, you’re not afraid to work the long hours because you love being there,” said SU alumna Patti Kleinman-Fallick, director of broadcast operations at the MLB Network.

The panelists were also asked whether a woman in the male-dominated industry has to have additional qualities to achieve success. 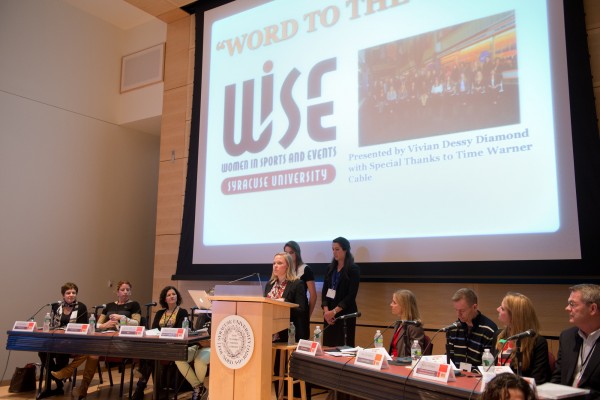 A graduate of Falk College’s first class of sport management students in 2008, Amy Hobbs, development director of the National Wheelchair Basketball Association, said there’s no difference between what men and women have to do to break into the field. “It’s networking. It’s being confident,” Hobbs said. “It’s knowing who you are and what you want to do in life—and that’s no different than any quality in a male as well.”

Laurie Orlando, senior vice president of talent development and planning for ESPN, said she has never been denied a job because she’s a female, and has always had supportive male colleagues. But she noted there are sometimes higher standards for women. For example, if a woman makes a mistake, there can be the false perception that maybe she wasn’t right for the job anyway. But if a man makes the mistake, the thought is that he’ll do better next time.

“The one thing I tell every single woman I meet with is you’ve got to be the best one in the room,” said Orlando, an SU alumna. “You’ve got to be prepared, you have to have your knowledge nailed down. Sports fans expect accuracy … If we let the fans down, then we haven’t done our job.”

At the MLB Network, there are stories being done and interviews with talent about Jackie Robinson and the movie that tells his story, “42,” being released April 12. The network also works with bands to promote shows. “We do cross over with other networks. Our guys go on to ‘DIY’ and build man caves, and we cross promote it across other mediums,” Kleinman-Fallick said. “The idea is to get cross promotion with fans that are watching on House and Garden [HGTV] or Food Network or some other media source to get their attention.”