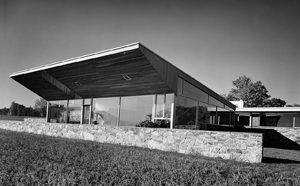 The National Endowment for the Humanities (NEH) has awarded the Syracuse University Library a $280,000 grant for phase two of a project that created a digital scholarly edition of the works of Bauhaus architect Marcel Breuer. The new project, titled “Marcel Breuer, Architect: Life and Work, 1953-1981,” will unite source materials from the latter half of Breuer’s career, during which his services were sought by powerful business, governmental and religious institutions.

These new source materials will be integrated in the Marcel Breuer Digital Archive web portal created in the first phase of the project, which was funded by an NEH grant to Syracuse University Library’s Special Collections Research Center in 2009.

Project activities include:
• the digitization of Syracuse University’s Marcel Breuer Papers and relevant materials from partner institutions, such as the Whitney Museum of American Art, the Smithsonian Institution’s Archives of American Art and the United Nations Education, Scientific and Cultural Organization (UNESCO), including drawings, correspondence and moving images and audio (approximately 70,000 new items)
• enhancing the functionality of the existing site, including the addition of a “lightbox” feature to allow users to create an account and save images for further research or for teaching purposes. The “lightbox” will also allow users to compare multiple images side-by-side.
• “Mapping Marcel Breuer,” a digital humanities pilot project. The creation of a geospatial mapping tool will help users visualize Breuer’s professional networks and the locations of his buildings. This tool will draw upon the metadata associated with correspondence, contracts and other documents.

Breuer began donating his papers to Syracuse University Library in 1964. Today, the Syracuse Breuer collection includes thousands of original oversized drawings and blueprints, correspondence and photographs. Upon Breuer’s death in 1981, his widow donated many of his remaining papers to the Smithsonian Institution’s Archives of American Art.

Based in the library’s Special Collections Research Center (SCRC) and led by its senior director, Sean Quimby, with project coordinator Teresa Harris, the project is a partnership with the School of Architecture (SOA). SOA students and faculty will assist with usability testing as the web project develops. SOA faculty member Jonathan Massey, along with Barry Bergdoll, Philip Johnson Chief Curator of Architecture and Design at the Museum of Modern Art, serve on the project’s advisory board.

“The completion of the Breuer project is essential if one of the most valuable yet consistently under-tapped resources of  20th century architectural history, and of American art, social and urban history, is to be rendered fully accessible. The digital archive could open not only a new generation of Breuer scholarship, it could open a whole new set of questions about the profile and issues of American modernism from the 1930s through the late 1970s,” Bergdoll said in a letter supporting the proposal.

Breuer was born in Pécs, Hungary, in 1902. At the age of 21, he went to work in the office of Walter Gropius, founder of the modernist Bauhaus School of Design. At the Bauhaus School, Breuer taught furniture design, and in 1925 earned critical acclaim for his “Wassily” chair, which combined the radical simplicity of form with tubular steel and fabric. He and Gropius emigrated to the United States in the late 1930s, where they taught at Harvard University and maintained a joint architectural firm in Cambridge, Mass.

In 1941, Breuer established a singular reputation for his “bi-nuclear” house, which organized physical space around new modes of day-to-day life. The “bi-nuclear” house, along with his demonstration house in the garden of New York’s Museum of Modern Art (1949), helped to inspire America’s fascination with housing in the post-war era.

By the mid-1950s, Breuer had designed some 60 private residences and had begun to undertake large-scale, institutional projects like the UNESCO headquarters in Paris (1953), the Whitney Museum of Art in New York (1966), buildings on the campuses of New York University and St. John’s University in Collegeville, Minn., and the Cleveland Museum of Art (1970).

The collections at Syracuse University, the Smithsonian and elsewhere document not only the buildings that were completed, but also projects that never came to fruition. Together, they document the career of a man that Time magazine in 1956 called one of the “form-givers of the 20th century.”