Award comes amid success of Saunders’ ‘Tenth of December’ 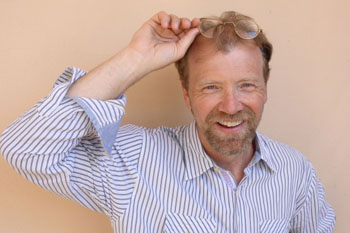 George Saunders G’88, professor of English in The College of Arts and Sciences, has been selected to receive the prestigious PEN/Malamud Award. Given annually since 1988 in honor of the late author Bernard Malamud, the award recognizes a body of work that demonstrates excellence in the art of short fiction.

The announcement comes amid the success of Saunders’ latest story collection, “Tenth of December” (Random House, 2013), which was published in January to near universal acclaim and inspired the New York Times Magazine cover story, “George Saunders Has Written the Best Book You’ll Read This Year.”

“It’s especially nice to be honored in a form that is so beautiful and that I love so much,” says Saunders, who joins company with previous winners such as John Updike, Saul Bellow, Eudora Welty, and Joyce Carol Oates ’60, H’00.

In addition to receiving a $5,000 prize, the Oneonta (N.Y.) resident will be recognized at a special ceremony in December at the Folger Shakespeare Library in Washington, D.C. Tickets for the event, which includes a memorial reading, go on sale in September.

The PEN/Malamud Award is the latest in a series of honors for Saunders, who seems to have the Midas touch. He has won the National Magazine Award for fiction four times and, in 2006, was named both a MacArthur and Guggenheim fellow. Moreover, “Tenth of December” is a New York Times bestseller—a rare feat for any short story collection.

Alan Cheuse, a member of the Malamud Award Committee, attributes Saunders’ success to a singular writing style, which is described as equal parts hilarious and compassionate. “Saunders is one of the most gifted and seriously successful comic short story writers working in America today,” says Cheuse, also an acclaimed author and book commentator. “And his comedy, like most great comedy, is dark. George Saunders is the real thing, the successor to such dark comedians of ordinary speech as Donald Barthelme and Grace Paley. He’s a Vonnegutian in his soul and, paradoxically, a writer like no one but himself.”

Chris Kennedy G’88, associate professor of English and director of the creative writing program, in which Saunders teaches, echoes these sentiments. “It wouldn’t surprise me if a hundred years from now, the name ‘George Saunders’ is uttered in the same way Mark Twain’s is today,” he says, adding that the PEN/Malamud Award is well deserved. “George is a master of the short story.”

A former technical writer and geophysical engineer, Saunders has come a long way since joining SU’s creative writing faculty in 1996—the same year he published his first story collection, “CivilWarLand in Bad Decline” (Riverhead Books). (“An astoundingly tuned voice—graceful, dark, authentic, and funny—telling just the kinds of stories we need to get us through these times,” novelist Thomas Pynchon wrote of Saunders’ debut.) Since then, Saunders has produced three more collections of short fiction, a volume of essays, a novella and a novella with illustrations.

Today, Saunders is beloved not just for his literary prowess, but for his ability to breathe life into an art form that is not always commercially viable. Says Dana Spiotta, assistant professor of English at SU and author of the award-winning novel “Stone Arabia” (Scribner, 2011): “George writes brilliant, original, deep-hearted fiction. … The fact that his latest collection is a runaway bestseller is great news for anyone who cares about literature.”

The PEN/Faulkner Foundation, now in its 33rd year, is committed to building audiences for literature and for bringing writers together with readers. This mission is accomplished through readings at the Folger by distinguished writers; the PEN/Faulkner Award for Fiction, the largest peer-juried award for fiction in the United States; the PEN/Malamud Award, honoring excellence in the short story and the Writers in Schools program, which brings nationally and internationally acclaimed authors to public high school classrooms in Washington, D.C., to discuss their work with students.