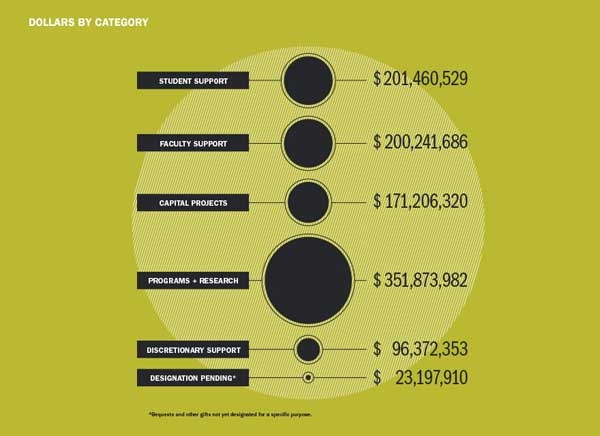 When The Campaign for Syracuse University kicked off in 2007, its goals were deemed “ambitious.” Some might have said impossible, in light of the financial crisis of 2007-2008. Today, as the campaign releases its final report, the numbers tell a different story. The final total—$1,044,352,779—is record-breaking, nearly double the funds raised in the University’s two prior campaigns combined.

Over the seven-year duration of the campaign, 65,589 donors gave 224,191 gifts of cash, pledges and deferred gifts, such as bequests from trusts or estates. Donors came from all geographies and demographics. Alumni represent the largest donor segment, with gifts also coming from faculty, staff, students, parents, university trustees, corporations and foundations.

“The incredible generosity of SU’s extended family has made the University stronger in so many ways,” says SU President and Chancellor Nancy Cantor. “Giving has come from all corners: from our campus and the city of Syracuse, from key regions in the U.S. and across the globe. Our growth in endowed support for students and the doubling of endowed faculty positions has provided the financial foundation for SU’s future and will impact the University for years to come.”

More than 25,000 donors gave to SU for the very first time during the campaign, with gifts and pledges of all sizes. From the $20-and-change gifts made by students commemorating their respective class years to the record number of gifts and pledges at the $1 million level or above, the impact of the campaign has been immediate and profound. Key highlights include:

Dan Pacheco, newspaper and online journalism professor and the Peter A. Horovitz Chair in Journalism Innovation, says his endowed position allows him to bring innovative ideas into the curriculum and help create well-rounded graduates. “When legacy news organizations are struggling to keep up with change brought on by digital technology, my endowed position allows me to keep my eye on the 10-year horizon,” Pacheco says.

Vice President for Development Brian Sischo says the campaign’s success is proof that SU donors have great passion for the University. “Our donors have helped to transform this campus, making a real difference in the lives of our students and faculty,” Sischo says. “Thanks to them, the future is full of exciting new opportunities, both here on campus and beyond.”

To learn about initiatives still in need of funding, visit giving.syr.edu.