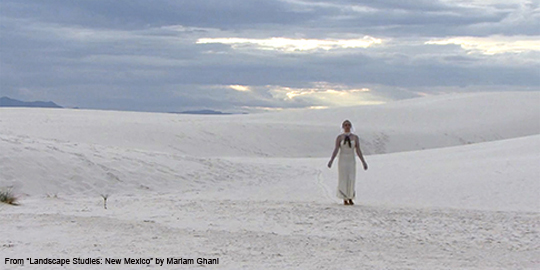 Urban Video Project and Light Work have announced the exhibition of the group show “Psychic Geographies” at UVP Everson from April 11-June 1. This will be the first time that UVP has mounted a group show, and it will feature five video pieces running continuously each night of the show. The show was curated by Anneka Herre.

In the pieces that make up “Psychic Geographies,” forces of desire, both personal and political, and forces of nature traverse the land with a heavy tread, describing the borders of contested territories and propagating strange ecologies.

“’Psychic Geographies’ explores geography in the broadest sense as an image or description of the earth. At a time when every image of the land is already fraught with political tension, economic interest and ecological anxiety, these pieces engage the ways in which various forms of representation, from the cherished photographic tokens of a lost homeland to architectural renderings for real estate development, from glossy magazine ads for travel agencies to ostensibly objective cartographic representations, all fail to adequately describe the Earth, not least because they efface the presence of the human from it,” according to Herre. “These pieces perform the landscape, suggesting alternative ways of relating to the land and its abstract correlate, Nature, and laying bare the extent to which we are all, human and non-human, part of that landscape in its constant becoming.”

As part of “Psychic Geographies,” a special indoor screening program, including additional video pieces, will be held in the Everson’s Hosmer Auditorium on Friday, April 26, at 7 p.m.

The screening will be immediately followed by a reception on the plaza from 8:30-9:30 p.m. catered by local coffeehouse Recess.

Mariam Ghani
Ghani is an artist, writer and teacher based in Brooklyn. Her research-based practice operates at the intersections between place, memory, history, language, loss and reconstruction. Her work in video, installation and photography has been exhibited and screened internationally, including at dOCUMENTA (13) in Kassel and Kabul, the Sharjah Biennials 9 and 10, the 2005 Liverpool Biennial, the Beijing 798 Biennial, the Museum of Modern Art in New York, the Tate Modern in London, the National Gallery in Washington, D.C., and the International Film Festival Rotterdam. Her public and participatory projects have been commissioned by Creative Time in New York, CEPA in Buffalo and the Arab American National Museum in Detroit.

Susannah Sayler/Ed Morris
Since 2006, Sayler and Morris have been artistic collaborators and co-founders of the Canary Project. The Canary Project has produced projects involving more than 30 artists, scientists, writers, designers and educators—all efforts to deepen public understanding of climate change. They have been exhibited widely in group and solo shows at Exit Art (NYC), Denver Museum of Contemporary Art—Creative Acts that Matter Program (Denver), Everson Museum of Art (Syracuse), ARTECH (Spain), Wave Hill (NYC), and Harvard Graduate School of Design. Sayler and Morris currently teach in the Syracuse University Department of Transmedia.

Basma Alsharif
Alsharif is a visual artist using moving and still images, sound and language to explore the anonymous individual in relation to political history and collective memory. Her work has shown in exhibitions and film festivals internationally, including the 17th SESC Videobrasil; Forum Expanded: Berlinale; Images Festival Ontario, where she received the Marion McMahon Award; Manifesta 8; the 9th Edition of the Sharjah Bienniale, where she received a jury prize for her work; the Toronto International Film Festival and at Conversations at the Edge (Chicago). She currently lives and works in Paris.

Jacqueline Goss
Goss makes movies and web-based works that explore how political, cultural and scientific systems change the ways we think about ourselves. For the last few years, she has used 2D digital animation techniques to work within the genre of the animated documentary. She is a 2008 Tribeca Film Institute Media Arts Fellow and the 2007 recipient of the Herb Alpert Award in film and Video. She teaches in the film and electronic arts department at Bard College in the Hudson Valley of New York.

Michael Robinson
Robinson is a film and video artist whose work explores the joys and dangers of mediated experience, riding the fine lines between humor and terror, nostalgia and contempt, ecstasy and hysteria. His work has screened in solo and group shows at a variety of festivals, museums and galleries, including the 2012 Whitney Biennial, the International Film Festival Rotterdam, the New York Film Festival, the Walker Art Center, MoMA P.S.1, the London Film Festival, REDCAT Los Angeles, the Wexner Center for the Arts, the Sundance Film Festival, Anthology Film Archives, Tate Modern, the Yerba Buena Center for the Arts, the Images Festival and the Ann Arbor Film Festival. He was the recipient of a 2012 Creative Capital grant, and his films have received awards from numerous festivals. He was listed as one of the top 10 avant-garde filmmakers of the 2000s by Film Comment magazine and one of the “Best 50 Filmmakers Under 50” by Cinema Scope magazine in 2012. His work has been discussed in publications such as Artforum, Art Papers, The Village Voice, Time Out New York and The Nation. He currently lives in West Danby, N.Y.