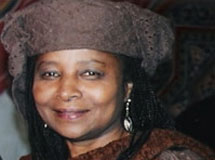 March has been a busy month for a Kenyan professor in The College of Arts and Sciences. Micere Githae Mugo, a Meredith Professor for Teaching Excellence in the Department of African American Studies (AAS), recently received the prestigious Flora Nwapa Award for excellence in Africana literature. Before that, she was invited to address the Commission on the Status of Women (CSW) at the United Nations in New York City.

“Professor Mugo is one of the leading lights of our department and the University,” says Renate Simson, professor and chair of AAS. “She also is quite influential in her native Kenya, whose own liberation struggles have figured prominently in her lifelong political activism.”

Mugo received the Nwapa Literary Award in recognition of her outstanding contributions as a poet, playwright, essayist, critic and teacher of literature and orature. She was presented the award on March 22 at the 39th annual African Literature Association Conference in Charleston, S.C.

The award is named for Flora Nwapa, a Nigerian author often referred to as the “Mother of African Writing.” Nwapa’s English-language novel, “Efuru,” was among the first by an African woman and has been a staple of African literary studies since its publication in 1966.

“I am thrilled and greatly honored to accept this award, commemorating a beloved sister and friend who still is creating for us in the other world,” says Mugo of Nwapa, who passed away in 1993. Mugo is in good company; last year’s award recipient was Ama Ata Aidoo, the internationally renowned Ghanaian author, playwright and scholar.

Earlier in the month, Mugo participated in the CSW conference, whose theme was “The Elimination and Prevention of Violence Against Women and Girls.” Most of her remarks—delivered at a high-level forum, chaired by the executive director of the United Nations Human Settlements Program—concerned women and girls in post-conflict urban environments.

“Writing can be a lifeline—especially when your existence has been denied, especially when you have been left on the margins, especially when your life and process of growth have been subjected to attempts at strangulation,” Mugo has famously said. Her political activism against government human-rights abuses has led to her own arrests, police harassment and remands for interrogation. In the early ’80s, she was forced into exile with her two young daughters, Mumbi and Njeri.

Mugo came to SU in 1993, following faculty appointments at Cornell and St. Lawrence universities in New York and at the universities of Zimbabwe (Southern Africa) and Nairobi in Kenya (East Africa). At SU, she has served as chair of AAS, director and co-director of SU’s Africa Initiative, founder and president of the Pan African Community of Central New York, and founder and president of the United Women of Africa Organization. She has earned many honors and awards, including the 2012 Distinguished Mwalimu Julius Nyerere Scholar Award, which she received at a formal ceremony at the University of Dar-es-Salaam (Tanzania).