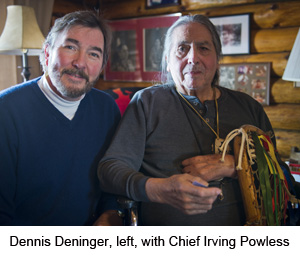 What cultures and people have shaped the sports we love that can elicit great passion in all of us? Fifteen students, led by Falk College sport management professor of practice Dennis Deninger, researched this question in great detail as part of SPM 300, “The History of Sport,” which debuted during the fall 2012 semester. Their research is the basis for a one-hour documentary titled “America’s First Sport,” set to premiere in Syracuse on April 22.

Each semester, SPM 300 will pinpoint a single topic for students to conduct original research and interviews, use primary sources and explore multiple facets of the subject. Lacrosse was selected as the subject for the course’s inaugural year because of its ancient origins and cultural connections in Central New York. This past fall, Deninger, who is also the director of the Newhouse Sports Communications graduate program, required students to look at the origins of organized sport in the United States, answering such questions as how has sport impacted American society, how does it play a cultural role, and what does the history and current state of American sports foreshadow for the future? Each student completed a final research project on lacrosse titled “America’s First Sport.”

Five students who enrolled in the course during fall 2012 are continuing the independent study this spring, including undergraduate students from the Falk College, Newhouse School and the College of Visual and Performing Arts. They have done research on amateur and professional lacrosse to support 45 interviews done by Professor Deninger since February. These include in-depth discussions with Native American leaders, current and legendary players and coaches, presidents of the Federation of International Lacrosse and U.S. Lacrosse, the commissioner of Major League Lacrosse, media from ESPN and Inside Lacrosse Magazine and lacrosse historians. Onondaga Nation Chief Irving Powless; current Onondaga Community College players, including All-World Under-19 goalkeeper Warren Hill; and SU coaches Roy Simmons Jr., Gary Gait and John Desko are among those featured in the documentary.

Students will play key roles in planning the symposium and are currently identifying topics to be placed before the panel and related lines of questioning. “The foundation of our program is experiential learning. It is a unique educational opportunity for our sport management students to research a topic that has influenced sports and create a timeless and influential documentary film,” says Michael D. Veley, director and chair of the Department of Sport Management.

“The shelf life of the student’s work in our History of Sport class will become part of the legacy of research that will help define the Falk College and Sport Management for years to come,” says Deninger. For more information about the premiere, contact the Department of Sport Management at 315-443-9881.