Science on Mars Time: Roving the Red Planet with Curiosity 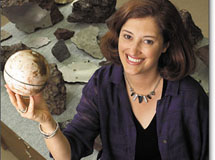 The Mars rover Curiosity is a roaming science lab on the Red Planet that is continually sending information to scientists on Earth. One of those scientists is Laurie Leshin, dean of the School of Sciences at Rensselaer Polytechnic Institute (RPI), a cosmochemist who looks for signs of water on Mars and other objects in the solar system.

Leshin will discuss some of the latest findings from Mars during “Science on Mars Time: Roving the Red Planet with Curiosity” at 4 p.m. Thursday, April 4, in 010 Crouse-Hinds Hall. Her lecture is part of the K. Douglas Nelson Lecture Series in the Department of Earth Sciences in The College of Arts and Sciences. The lecture is co-sponsored by SU ADVANCE and Women in Science and Engineering (WiSE) at SU and is free and open to the public. Parking is available in SU’s paid lots.

In addition to Leshin’s presentation, WiSE will present the 2013 Norma Slepecky Undergraduate Research Prize in the Sciences. The prize is presented annually to students who demonstrate excellence in scholarship and submit the best manuscript or presentation from a professional meeting in the natural sciences.

Leshin is a member of the science team for the Curiosity, a sophisticated science lab that touched down on the planet’s surface on Aug. 5, 2012. Curiosity is the centerpiece of NASA’s $2.5 billion Mars Science Laboratory mission. The huge robot landed inside Mars’ Gale Crater, kicking off a planned two-year surface mission to determine if the area ever could have supported microbial life.

Prior to joining RPI, Leshin served as the deputy associate administrator for NASA’s Exploration Systems Mission Directorate, where she played a leading role in NASA’s future human spaceflight endeavors. She oversaw the planning and execution of the next generation of human exploration systems, as well as the research, robotic and future capabilities development activities that support them. She was also engaged in initiating the development of commercial human spaceflight capabilities to low earth orbit. Prior to that work, Leshin served as director of science and deputy center director for science and technology at NASA’s Goddard Space Flight Center.

Leshin is a former director of the Center for Meteorite Studies at Arizona State University, which houses the largest university-based meteorite collection in the world. An asteroid was named in her honor (4922 Leshin) by the International Astronomical Union. Leshin was the inaugural recipient of the Meteoritical Society’s Nier Prize in 1996 for her work, served on President Bush’s Commission on Implementation of United States Space Exploration Policy, received the 2004 NASA Distinguished Public Service Medal for her work on the commission and, in 2011, the Outstanding Leadership Medal for her work at NASA. President Obama recently appointed Leshin to the Advisory Board of the Smithsonian National Air and Space Museum.

She holds a Ph.D. in geochemistry from the California Institute of Technology.