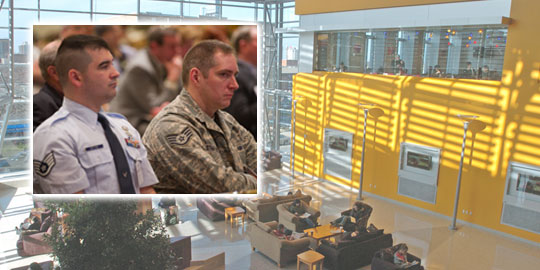 The Martin J. Whitman School of Management has been ranked #26 by Military Times on its inaugural list of Best for Vets: Business Schools, the publication recently announced. The results are published in the March 2013 issue of Military Times EDGE.

Editors evaluated responses to a 60-question survey completed by 100 business schools, which included questions regarding academic policies, financial aid, academic and career support, academic success, campus culture and selectivity. The Best for Vets: Business Schools rankings also took into consideration each school’s answers to the Military Times’ previous survey of colleges and universities, the results of which were published in November 2012.

Since 1952, Whitman has offered educational programs serving military members and veterans. The Defense Comptrollership Program (DCP) was founded in response to financial problems identified during World War II. More than 1,600 military and civilian personnel have attended the program and graduates have risen to the highest ranks of financial management in the Department of Defense (DOD).

Because various branches of the government have a growing need for individuals who understand and can develop, manage and lead the complex integration of goods, services and distribution in a variety of tactical situations, the Whitman School offers a master of science in supply chain management (LOGTECH iMS). This competitive, limited-residency program provides its graduates—both active duty and civilian personnel—with a clear competitive advantage in the ability to strategically align critical supply chain support services with vital tactical objectives that meet DOD goals and objectives.

“This ranking is due recognition of the more than 60 years we have been collaborating with the Department of Defense in the delivery of financial management education to military and DOD civilians. I feel it’s a privilege to be a part of this enduring and important program as we continue to partner in preparing our future financial management leaders for the challenges ahead,” says Irma P. Finocchiaro, director of executive education and defense programs at the Whitman School.

In 2007, Barnes Professor of Entrepreneurship and former U.S. Air Force officer Mike Haynie worked with Whitman Dean Melvin T. Stith, a Vietnam veteran, to leverage the school’s faculty and top-ranked entrepreneurship programs to empower America’s veterans with disabilities to secure their own economic freedom in the most American way possible—through self-employment. As a result, the social venture the Entrepreneurship Bootcamp for Veterans with Disabilities (EBV) was born.

The EBV offers self-employment career training, education and job creation for post-9/11 veterans with service-connected disabilities. It is now offered through a national consortium of eight world-class schools that includes Texas A&M, Purdue, UCLA, UConn, Louisiana State, Florida State and Cornell, with SU serving as national host. More than 600 veterans have graduated from the program, with more than 670 new jobs created as a result of their ventures.

In 2010, the school’s portfolio of veteran entrepreneurship training programs further expanded to serve military family members , female veterans and National Guard and Reserve members with the addition of  EBV-Families (EBV-F), Veteran Women Igniting the Spirit of Entrepreneurship (V-WISE) and Operation Endure & Grow. EBV-F leverages flexibilities inherent in small business ownership to provide a vocational and economic path forward for military family members and/or surviving spouses of those who gave their lives in service to the country. V-WISE is available to female veterans of all service eras and branches, military spouses and transitioning active duty service members with a passion for and interest in starting or growing a small business; more than 500 have taken part in programs across the country since its inception. Endure & Grow is an online training experience for National Guard and Reserve members and their families focused on the fundamentals of launching and/or growing a small business.

In 2011, the University made a larger, institutional commitment to veterans and military families, building on its storied role of educating veterans since World War II, by forming the Institute for Veterans and Military Families (IVMF) with founding partner JPMorgan Chase & Co. Haynie was appointed executive director and founder, and the IVMF now operates the portfolio of veteran entrepreneurship training programs founded at Whitman.

The IVMF maintains deep ties with the Whitman School. Dean Stith serves as an inaugural advisory board member, Whitman faculty donate their time as instructors for the self-employment training programs and Whitman undergraduate and graduate students work at the IVMF as interns and research assistants, among other collaborations.

“I am thrilled with the Military Times recognition of Whitman as a first-ever top 30 ‘Best for Vets’ business school. The veteran entrepreneurship training programs founded at Whitman are a true testament to the school’s mission, our University commitment to veterans and military families and the enduring legacy of Dean Stith’s leadership,” says Haynie.

For more information on programs offered to the military and veteran community at Whitman and the IVMF, visit whitman.syr.edu and vets.syr.edu.