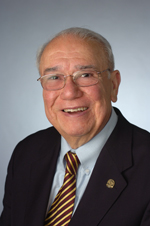 In honor of his significant contributions to the field of social work through teaching, research, policy advocacy and service, Professor Alejandro Garcia will receive the 2013 Daniel and Mary Lou Rubenstein Social Justice Award Tuesday, March 26, at 7 p.m. in the Schine Student Center, Room 304 ABC.

Sponsored by Social Workers United, the School of Social Work, CNY NASW and the Falk College, the program is free and open to the public. This annual event is one of several activities celebrating National Professional Social Work Month commemorated each March.

According to students in Social Workers United, “Dr. Garcia was chosen as this year’s recipient of the Social Justice Award because of his significant influence on social justice not only within the university community but throughout the nation. In working with him, his genuine interest and respect for others is apparent. This year, Social Workers United not only wishes to acknowledge Dr. Garcia’s work in social justice but also to honor his 35th anniversary with Syracuse University.”

Throughout his distinguished 35-year career at Syracuse University, Garcia has touched the lives of tens of thousands of students through his courses on gerontology, human diversity and social policy, as well as in his role as director of the School of Social Work. A valued contributor who has served on the editorial boards of the Encyclopedia of Social Work and numerous national journals, he is the co-editor of three books and author of numerous articles and book chapters.

Garcia has been the recipient of several honors, including Lifetime Achievement Awards from the New York State Chapter of the National Association of Social Workers and from the New York State Social Work Education Association. He was named a Social Work Pioneer by the National Association of Social Workers, and honored by the National Hispanic Council on Aging with its Special Recognition Award for outstanding leadership and advocacy on behalf of older adults. He is a recipient of the Andrus Award, the highest recognition that AARP New York awards for community service and received the Distinguished Service Award by California State University at Sacramento. He has also received several outstanding teaching awards at Syracuse University, including the Scholar/Teacher of the Year. He has also been honored by the SU LGBT Resource Center with the Foundation Award for Outstanding Faculty Member.

Through his visionary commitment to students, he created the Alejandro Garcia Latino/Hispanic Excellence in Social Work Fund through a generous donation. This scholarship fund provides financial assistance to graduate students enrolled in the School of Social Work who reflect academic excellence, professional potential and an interest in serving the Latino/Hispanic community. He additionally created a book fund to help graduate students who need financial assistance to purchase their required textbooks.

For more than 30 years, the Rubenstein Social Justice Award recognizes a person who reflects the values of social justice in his or her professional and personal life. The award is given in honor of the late professor Daniel Rubenstein, a former faculty member in the School of Social Work and his late wife, Mary Lou, a former school social worker. For more information, and to R.S.V.P., contact the School of Social Work at 315-443-5550.