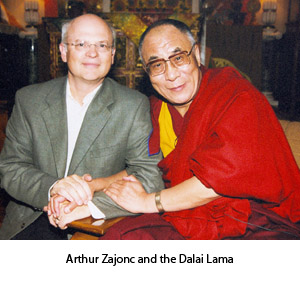 Physicist Arthur Zajonc, president of the Mind and Life Institute in Hadley, Mass., will present “Conversing with the Dalai Lama: 25 Years of Dialogue with Science” at 5 p.m. Tuesday, March 26, in Gifford Auditorium. The lecture is free and open to the public. Parking is available in SU’s paid lots.

Zajonc’s lecture is presented by the Kameshwar C. Wali Lecture in the Sciences and Humanities, the Department of Physics, and the SU Humanities Center, all housed in The College of Arts and Sciences.

Zajonc is the Andrew W. Mellon Professor of Physics Emeritus at Amherst College, where he taught from 1978-2012. Since 1997, Zajonc has also served as scientific coordinator for the Mind and Life dialogue with the Dalai Lama, whose meetings have been published as “The New Physics and Cosmology: Dialogues with the Dalai Lama” (Oxford 2004) and “The Dalai Lama at MIT” (Harvard UP, 2006).

Zajonc’s research has included studies in parity violation in atoms, the experimental foundations of quantum physics and the relationship between sciences, the humanities and meditation. He has fostered the use of contemplative practice in college and university classrooms, and he continues to speak around the world on the importance of contemplative pedagogy. Out of this work and his longstanding meditative practice, Zajonc has authored “Meditation as Contemplative Inquiry: When Knowing Becomes Love” (2008)

Zajonc’s other books include “Catching the Light: The Entwined History of Light and Mind” (1995);  “The Quantum Challenge” (co-author, 2005); and “Goethe’s Way of Science” (coeditor). He was a visiting professor and research scientist at the Ecole Normale Superieure in Paris and the Max Planck Institute for Quantum Optics, and a Fulbright professor at the University of Innsbruck in Austria.