Michael A. Speaks Named Dean of School of Architecture 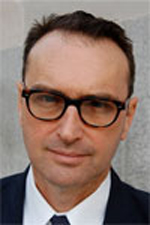 Syracuse University Vice Chancellor and Provost Eric F. Spina today announced the appointment of Michael A. Speaks to the position of dean of the School of Architecture. Speaks is the current dean of the College of Design at the University of Kentucky, where he is also a professor of architecture. The appointment concludes a national search to replace former Dean Mark Robbins, who stepped down last spring. Speaks will assume his position on July 1.

The former director of the graduate program at the Southern California Institute of Architecture in Los Angeles, Speaks has taught in the graphic design department at the Yale School of Art, and in the architecture schools at Harvard University, Columbia University, The University of Michigan, UCLA, Art Center College of Design in Pasadena, Calif., and the Berlage Institute and TU Delft, in the Netherlands. Speaks has published and lectured internationally on contemporary art, architecture, urban design and scenario planning. His essays and exhibitions in the 1990s were among the first to introduce a new generation of Dutch architects and planners to a broader audience in North America.

“I am thrilled to join the Syracuse University School of Architecture, among the most highly regarded programs in the U.S. and, indeed, in the world,” Speaks says. “It is a distinct honor to follow those esteemed deans and school leaders who came before me and who put the school on such a strong foundation. Working with faculty, staff and students, and exploring new opportunities on the horizon, I am confident that together we will build upon and enhance the reputation and standing of this truly great school of architecture.”

SU Chancellor and President Nancy Cantor indicates that Speaks is perfectly positioned to build upon the School of Architecture’s tremendous foundation. “As a scholar and leader in design education, Michael emphasizes innovative approaches and interdisciplinary connections focused on real-world problem solving, particularly on addressing the challenges of older industrial cities—emphases that align perfectly with SU’s strengths. We’re pleased to have been able to attract him here and we know he’ll hit the ground running.”

Speaks has played an important role in recent debates about city branding and alternative models of city planning, authoring a number of essays and advisory studies, as well as overseeing scenario studies commissioned by city and regional governments in the U.S. and in Europe. Speaks has been at the center of debates about the role innovation and prototyping play in design and has written a series of influential essays that argue for the importance of what he calls “design intelligence,” or the various forms of design knowledge generated during design but which are often overlooked in favor of “the design.”

“The search committee and I are deeply impressed with Michael’s scholarship and leadership, as well as his vision for integrating multiple perspectives in the design process,” says Spina. “I believe that his demonstrated record of entrepreneurial leadership make him the ideal candidate to work with the faculty and staff to advance the school in a highly dynamic time both for higher education and the architecture profession. I look forward to the connections that will continue to grow with other disciplines across SU’s schools and colleges, as well as with external partners from the local to the global.”

Speaks was founding editor of the cultural journal Polygraph, and former senior editor at Any in New York, where he also edited two books in the series, “Writing Architecture,” published by MIT Press. In addition, he served for many years on the editorial advisory board of a+u in Japan, and as a contributing editor for Architectural Record.