People with a penchant for poetry are invited to attend Syracuse University’s inaugural Spring Sonnet Marathon on Wednesday, March 20. Held in the Noble Room of Hendricks Chapel, the program includes a sonnet reading from 1-5 p.m., followed by an open-mic session and reception from 5-6 p.m. The event is free and open to the public. 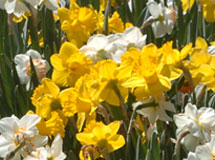 Readings will feature classic and original texts and will be done solo, in pairs and as a group. For more information or to sign up to read, contact organizers Melissa Welshans or Ashley O’Mara at SUSonnetMarathon@gmail.com.

The Spring Sonnet Marathon is co-sponsored by the Department of English in SU’s College of Arts and Sciences and by SU’s Graduate Student Organization.

“This event is a celebration of the sonnet, one of the best known and beloved forms of poetry,” says Welshans, a Ph.D. student in English. “We will feature works by not only the more canonical sonneteers—William Shakespeare, John Milton and Elizabeth Barrett Browning, to name a few—but also students and faculty members. People of all ages and backgrounds are encouraged to attend.”

Originating in Italy during the 13th century, the sonnet is usually a 14-line poem that follows a specific rhyme scheme and structure. Various types and groups of sonnets have evolved over the ages, with Shakespeare’s English sonnets arguably being the best known.

The advent of free verse during the 20th century—along with the inclusion of music, art and other media—has propelled the sonnet in curious new directions.

“What started out as a very formulaic [poetic] form—not without its creative merits, but reliably about a man’s love for the ideal woman—has evolved over the centuries: from Shakespeare’s homoerotic sonnets, [John] Donne’s religious-erotic sonnets and Barrett Browning’s feminist sonnets; to contemporary poems on everything from food to 9/11,” says O’Mara, a master’s student in English. “We have students in our creative writing program writing sonnets, and even Rufus Wainwright has set Shakespeare’s sonnets to music. It’s a poetic form that is still very much alive today and whose structure still sparks inspiration.”

“We want to showcase the enduring beauty and potential of this centuries-old art form,” says Welshans, of the marathon.