Robert Rubinstein is generally known as a peaceable guy. The Maxwell School professor of anthropology and international relations is soft-spoken. He was a conscientious objector during the Vietnam War. He was a cofounder of the Commission on Peace and Human Rights of the International Union of Anthropological and Ethnological Sciences. He ran Maxwell’s Program on the Analysis and Resolution of Conflicts from 1994-2005. Since 1999 he has served on the Board of Directors of the Ploughshares Fund, the most prominent foundation promoting the field of international peace and security.

So it seems more than a little shocking that a few years ago, one of his fellow anthropologists called him a “war criminal” and advocated that he, among others, be banned from the American Anthropological Association.

His crime? He had been part of a panel of military anthropologists, called “The Empire Speaks Back: U.S. Military and Intelligence Organizations’ Perspectives on Engagement with Anthropology.”

The matter was debated as far back as World War II, with many anthropologists then putting themselves at the service of the military. Even then, however, some objected to blurring the previously strict line between the anthropologist and the military.

More recently, the issue heated up after the U.S. invasion of Iraq, especially after the widespread abuses of prisoners at Abu Ghraib became known. Journalist Seymour Hersh, writing for The New Yorker in 2004, claimed that the military designed many of its shame- and humiliation-based tortures on knowledge gained from a book called “The Arab Mind,” written by anthropologist Raphael Patai in 1973. While there is disagreement over whether the claim is true, the possibility appalls many anthropologists. 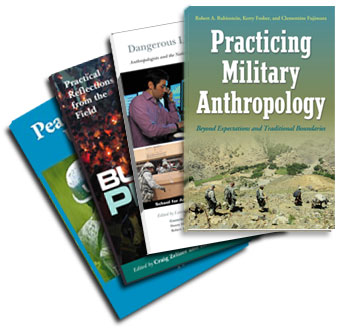 Furthering complicating things, in 2007 the discipline became aware of the Human Terrain System, as part of which the military sought to embed anthropologists with military units so that they could provide on-the-ground cultural advice. Anthropologists who got into the profession to further human understanding were horrified, and said the profession should stay from the military.

But Rubinstein and other military anthropologists feel that anthropologists have valuable knowledge to share, and this self-exile marginalizes voices that need to be heard in national security discussions. For example, he says, “A member of the military might think that the way to send the message that they don’t want an all-out war is to use a smaller nuke. An anthropologist recognizes that that isn’t really the message that’s being sent; but he might be able to find other pathways for settling the conflict.”

Rubinstein himself first began to study the military in the mid-1980s, when he began to examine U.N. peacekeeping. In 1988, he moved to Egypt, where he had grants to study peacekeeping. There, he studied U.N. Truce Supervision Organization, which was the first U.N. peacekeeping operation, established in 1948 to monitor truces between Israel and its Arab neighbors. He stayed there until 1992, but went on to study U.N. involvement in Somalia and other places. Out of those experiences came his book “Peacekeeping Under Fire” (Paradigm, 2008).

While working on these projects, Rubinstein found himself getting to know some military officers. To his surprise, they defied the stereotypes of the military current in anthropology—many were smart, thoughtful and open to input from outside experts.

Rubinstein’s study of the military constitutes one type of military anthropology. The type that has been more controversial, and in which he has also been engaged, is working with or for the military. In Rubinstein’s case, he has never been employed by the military. But he has advised and consulted for them and the United Nations on improving practices for peacekeeping and humanitarian interventions.

Partially in response to the incident where he and other military anthropologists were called war criminals, Rubinstein, along with Kerry Fosher and Clementine Fujimura, put together and edited a book called “Practicing Military Anthropology” (Kumarian Press, 2013). In it, they and four others examine their decisions to practice various types of military anthropology.

Rubinstein hopes this volume will inform people of the wide variety of things that military anthropologists actually do. He further hopes it will stimulate discussion about what exactly is the proper role of anthropologists when it comes to the military.

Rubinstein observes, “In theory, anthropologists are engaged in exploring, deeply and fairly, ideas and practices that they themselves may not want to do or share, and thus they should not exclude from their work an area of social life as consequential as the military.”