“Live theater offers not only that magical communion that happens when we are surrounded by other people, the audience, sharing moments with live actors on stage, but the expectation that what we are witnessing may truly touch us, open doors we dimly perceive, or didn’t even know were there. If we are to justify theater’s existence in a technological world of entertainment, it must serve art. It must serve, in particular, one of the unique qualities of art—its potential to enrich the human spirit.”
-Arthur Storch 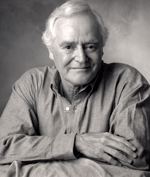 Arthur Storch, the founding producing artistic director of Syracuse Stage and former chair of Syracuse University’s Department of Drama (1973—1992), has died at age 87. He is remembered as a passionate, colorful and insightful pioneer of the regional theater movement of the 1960s and ’70s, putting Syracuse Stage on the map artistically and leading the 1980 renovation of Syracuse Stage’s 500-seat Archbold Theatre. As a professional artist and educator, he was integral in creating the unique relationship between Syracuse Stage and SU Drama, which through his efforts blossomed into a national model for sharing resources and talent between an undergraduate training program and a professional theater.

As the producing artistic director for Syracuse Stage, Storch directed 30 plays ranging from Shakespeare to Beckett and supervised the production of more than 100 others. During his tenure, the quality of the productions and high standard of professionalism made Syracuse Stage a vital cultural force in Central New York and theater an important part of the cultural fabric. Through numerous world and American premieres, and by taking productions on tour or transferring them to New York or elsewhere, Storch supported the careers of many directors, actors and designers who found Syracuse Stage an exciting place to work. He left Syracuse in 1992 with the Mayor’s Achievement Award, and the Arthur Storch Theatre in the Syracuse Stage/SU Drama complex was named in his honor.

“One of the traits that I most admired about Arthur was his attention to the audience. He knew that the audience was the final arbiter of the success of a play. If the audience was restless and not focused, it was not the fault of the audience. It meant that the director and actors had more work to do,” says Jim Clark, former producing director of Syracuse Stage and former Chair of SU Drama. “Another of his great strengths was his ability to give guest directors very specific, cogent, intelligent, and, at times, brilliant notes at dress rehearsals and previews. He knew exactly what to say to make a moment work.”

“Arthur Storch has left an extraordinary and vital legacy in Syracuse and this nation as an insightful and courageous pioneer of the American Regional Theater movement. His belief in the power and purpose of theater to enrich the human spirit, and his passion in training the next generation of theater artists remains a guiding force for all of us at Syracuse Stage and SU Drama,” says Timothy Bond, producing artistic director of Syracuse Stage and SU Drama.

“Arthur Storch exemplified the intrepid entrepreneurial spirit of Syracuse University,” says SU Chancellor and President Nancy Cantor. “His pioneering work in the regional theater movement bridged divides by making outstanding theater more accessible to communities. As a leader in democratizing the dramatic arts in this way, Arthur made a profound impact that reverberates nationwide, but nowhere more powerfully than here in Central New York, where Syracuse Stage and SU Drama carry the torch of innovation that Arthur passed to us. The SU family mourns his loss, but we know that flame will continue to burn brightly.”

Storch was attracted to producing a variety of theatrical works, mixing the classics of William Shakespeare, Henrik Ibsen, Anton Chekhov, George Bernard Shaw, Arthur Miller and Tennessee Williams with daring and, at times, controversial productions of Sam Shepard, Samuel Beckett, Michel Tremblay and an array of well- and lesser-known contemporary writers from America and abroad.

Writing about Storch’s world premiere production of William Gibson’s “The Butterfingers Angel” in 1974, The New Times’ David Feldman noted, “And for Syracuse, the concept of regional theater comes alive with this production.” Storch, he noted further, “has turned the old Regent into an exciting place for theater of all sorts to happen.” An article in CNY Magazine noted that “Syracuse Stage has not only undertaken a change in name, but a whole new image in its transformation from the Syracuse Repertory Theatre. At the pinnacle of that change is Arthur Storch.” Of the 1988/89 season, the Post-Standard columnist Joan Vadeboncoeur said “Regional theater doesn’t get any better.”

[quote style=”boxed” float=”right”]Arthur Storch has left an extraordinary and vital legacy in Syracuse and this nation as an insightful and courageous pioneer of the American Regional Theater movement. His belief in the power and purpose of theater to enrich the human spirit, and his passion in training the next generation of theater artists remains a guiding force for all of us at Syracuse Stage and SU Drama.”-Timothy Bond[/quote]Simultaneously, under Storch’s guidance, SU’s Department of Drama in the College of Visual and Performing Arts (VPA) developed into one of the most sought-after B.F.A. programs in the country. The B.F.A. in musical theatre was added during his time as chair of the department.

“While I never had the privilege of meeting or working with Arthur, I am honored to play a part in continuing his legacy. The partnership between the Syracuse University Department of Drama and Syracuse Stage provides unparalleled training opportunities at the undergraduate level for emerging theatre professionals. These opportunities are the direct result of Arthur’s vision and passion,” says Ralph Zito, chair of SU’s Department of Drama.

Storch’s illustrious career, encompassing Broadway, regional theater, films and television, includes the New York productions of “The Impossible Years,” “Golden Rainbow,” “The Owl and the Pussycat,” “The Chinese and Dr. Fish,” “Three by Three,” “The Typist and the Tiger” and, later, “Tribute” with Jack Lemmon. In film, he appeared as the psychiatrist in the 1973 film “The Exorcist.” In addition to serving almost 20 years as producing artistic director of Syracuse Stage, he served three years as artistic director of the Berkshire Theatre Festival, and he was a lifetime member and teacher with the Actors Studio at the New School of Drama.

In October of 1991, Arthur Storch announced his retirement from Syracuse Stage and SU Drama, saying simply that it was “time to stop and smell the flowers.” At a press conference, he reflected on his tenure at Stage: “I think what I am most proud of, as far as Syracuse Stage is concerned, is that we created a standard of quality that does not cater to the lowest common denominator. The bottom line has always been: This is the best play and these are the best people, not this play will sell the most tickets.”

Before he left town, however, there was one matter that needed to be addressed. Staff members recall that throughout his tenure, Storch had periodically “threatened” to act in a play. At the time of his retirement announcement he had not done so. He finally made good on that threat when he appeared with Virginia Kiser in A. R. Gurney’s “Love Letters,” which he also directed.

The current Syracuse Stage/SU Drama co-production of “A Midsummer Night’s Dream” will be dedicated to Storch.