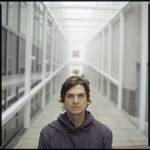 Percussionist and composer Glenn Kotche, a member of the groundbreaking American rock band Wilco, will give a talk on Tuesday, March 5, at 6:30 p.m. in the Lender Auditorium, located on the concourse level of the Martin J. Whitman School of Management. The lecture is part of the Bandier Program’s Soyars Leadership Lecture Series in the College of Visual and Performing Arts’ (VPA) Rose, Jules R. and Stanford S. Setnor School of Music. It is open to the University community.

Kotche will also perform a free concert on Thursday, March 7, at 8 p.m. in the Rose and Jules R. Setnor Auditorium, Crouse College. The program will feature solo, chamber and percussion pieces by Kotche, along with the Syracuse University Percussion Ensemble.

Chicago-based Kotche has been heralded as one of the most exciting, creative and promising composers and performers in modern music. His eclectic works have focused on the creative use of rhythm and space, navigating the territory between the academic and the primal, the consonant and the dissonant. Kotche’s various stints with groups and ensembles have resulted in participation in more than 90 albums to date, including three recorded solo works, the most recent of which, “Mobile” (Nonesuch Records, 2006), was released to critical acclaim from such publications as the Guardian and the New York Times.

Kotche has received international attention for his “unfailing taste, technique and discipline” (Chicago Tribune), and has been commissioned to write pieces for such world-renowned ensembles as Kronos Quartet, the Silk Road Ensemble, Bang on a Can All-Stars and So Percussion.

In addition to his work as a composer and solo percussionist, Kotche is a member of Wilco, with whom he has played since 2001. “Yankee Hotel Foxtrot,” the first album the band recorded after Kotche joined the group, was met with critical and mass acclaim. Rolling Stone magazine recently called it the third best album of the decade. Kotche also plays on the Grammy Award-winning “A Ghost is Born” and the Grammy-nominated “Sky Blue Sky,” “Wilco (The Album)” and “The Whole Love.”

Regarded as one of the world’s best live bands, Wilco has performed at virtually every major jazz, rock and folk festival in North America, Europe, Brazil, Japan, Australia and New Zealand and has headlined shows everywhere from Madison Square Garden to Tanglewood to Millennium Park to Massey Hall. In 2010, Kotche and his Wilco bandmates started their own music festival, Solid Sound, in collaboration with the Massachusetts Museum of Contemporary Art (MASS MoCA). Kotche contributed a permanent sound installation to the museum’s collection.