Getting to Know: Sarah Walton

Discovering life over a cup of tea 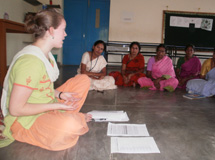 Forget “Lonely Planet” travel guides, scholarly advice, National Geographic and preconceived notions about a place. When Syracuse University student Sarah Walton studied abroad in India, one of the most important lessons she learned was: to really get to know a place, “have a cup of tea with someone and listen as they talk about their experiences.”

Walton, a senior policy studies and geography major in SU’s College of Arts and Sciences and a native of Henniker, N.H., traveled to the city of Mysore, India, during the fall of her junior year through SU Abroad’s World Partnership Program. It had been her childhood dream to one day travel to India, a country she fell in love with in fourth grade after studying its culture, art and music through her school’s “Artist in Residency” program. But the romanticized vision she held didn’t match the reality she found when she immersed herself in the country’s social and economic challenges through the classes she took that fall.

“I’ve never been a science or medical person,” Walton says, “but the class on health policy really stood out as phenomenally interesting and a serious topic that I think Westerners have a kind of privilege to ignore.”

For the first time, Walton came face to face with the reality that millions of people in India and other developing nations do not have access to medical facilities or the kind of preventive medicine that she had always taken for granted. She learned about the devastating effects of tuberculosis, malaria and AIDS on the population. And she was stunned to learn of the very close relationship between menstrual health and hygiene and the likelihood of girls dropping out of school or graduating.

“I learned that many girls all over India—and in other parts of the world—drop out of school after they begin menstruation,” Walton says. “When I was in fifth grade, we had ‘the talk,’ but it’s not talked about in India. Many girls don’t know how to manage their period, they don’t have money to purchase sanitary supplies, and they are caught up in cultural taboos associated with menstrual blood in which women are ‘put aside’ during that time of the month.”

Determined to learn more about this issue, Walton concluded her semester abroad program with an internship at a rural hospital and school operated by the not-for-profit Swami Vivekananda Youth Movement (SVYM) in Saragur, India. Founded in 1984 by medical students, SVYM operates community-based health and education projects that target tribal and rural poor Indians. “I wanted to dive into this issue,” Walton says. “I didn’t understand it. I tried putting myself into their shoes and it wasn’t working.”

Walton lived for more than a month in a tiny room in the rural hospital. There was no hot water, only a couple of hours of electric power each day and virtually no access to the Internet. She talked to doctors, community health workers and teachers. She worked in the clinics and classrooms. She asked lots of questions. But, mostly, she was an astute observer of the life going on around her.

“Sanitation is a lot different in India than here at home,” Walton says. “The simple act of going to the restroom—as intimate as that is—is a lot more public over there, where they still use squatter’s stalls.”

A squatter stall, Walton explains, is little more than a hole in the ground, no seat, no toilet paper. If one is lucky there might be a small faucet and a bucket. Sometimes there is a door, sometimes not.

“I was in India for four and a half months,” Walton says, “which means I was there for four menstrual cycles. I understood how difficult it was to manage.”

Walton developed a survey for the girls who attended the school to gather information about their knowledge of menstruation, when they started their period, how they manage it and their comfort level in discussing these issues with others. She also surveyed the teachers and researched best practices on educating adolescent girls about issues of puberty, hygiene and female reproduction.

“I have grown so much more comfortable speaking about menstruation,” Walton says. “At first, I had trouble even saying the word ‘period.’ I never thought I would get to the point where I could speak so candidly about an issue so private.”

Her gift to the school before returning to the United States was a manual for teachers, “Teacher Empowerment: How to Handle Girls’ Adolescent Education Sustainably.” The manual included age-appropriate lesson plans about reproductive health and hygiene, discussion ideas and reference materials. She also donated 100 sanitary napkins to the school—it’s all she could purchase in a local store—leaving the stash with a teacher who agreed to be the go-to person for girls in need.

After returning home, Walton decided to turn her experiences in India into her Capstone Project for the Renée Crown University Honors Program. But she needed an end to the story. She wanted to find out if the manual and lesson plans she left behind were being used and whether they were effective. E-mailing her former colleagues wasn’t working. So she applied for, and received, a 2012 Crown Award that enabled her to return to Saragur in January 2013.

Upon her return, Walton discovered that a female principal had been hired for the school. The toilet facilities had been updated so that every toilet had a little dustbin and stack of newspapers to allow for the proper disposal of sanitary napkins. The washing facilities had also been updated. Moreover, the school recruited a male teacher to develop a parallel program for boys on puberty and adolescence.

Walton did a second survey of the girls and teachers. While she is still analyzing the data, preliminary results indicate that the girls have gained confidence in their ability to manage their menstrual period while attending school and that teachers have broadened the discussions to include parents.

“I’ve learned that if you talk about an issue, people begin thinking about it and change is made,” Walton says. “The teachers have decided to tackle this issue head on and the results are amazing. I think I’ve been empowered through education. My experiences in India have shown me what education can do and what you can leave behind that can make a difference.”