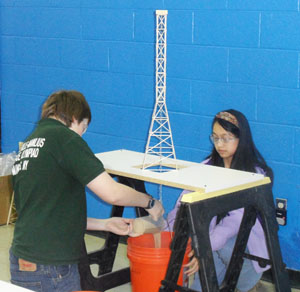 As the men’s basketball team battles Louisville in the Carrier Dome, across campus hundreds of Central New York middle-school students will compete in a battle of minds during the 2013 Mid-State Science Olympiad B Division tournament, Saturday, March 2, beginning at 8 a.m. in the Life Sciences Complex. The Departments of Chemistry and Biology in SU’s College of Arts and Sciences are hosting the event.

“The Departments of Chemistry and Biology are proud to welcome and support the Science Olympiad,” says Karin Ruhlandt, professor and chair of the Department of Chemistry. “It will be exciting to see these junior scientists converge on campus for the competition.”

“The young students participating in the Science Olympiad are the future of science in our country,” says Ramesh Raina, professor and chair of the Department of Biology. “We are very excited to see all of the wonderful things they are learning and their commitment to this competition. We want to support and encourage them in every way we can.”

The top four teams will go on to compete April 12 and 13 at the New York State Science Olympiad B Division tournament, also being hosted at Syracuse University. The teams’ ultimate goal is to be among the finalists to compete in the 2013 National Science Olympiad Tournament at Wright State University in Ohio.

“The students involved in Science Olympiad spend every day after school practicing for these events with as much intensity and commitment as student athletes,” says SU alumna Wendy Davis ’94, G’08, regional coordinator for the Mid-State Science Olympiad B Division. Davis earned a bachelor’s degree in chemistry from SU’s College of Arts and Sciences and a master’s degree in science education from SU’s School of Education.

In addition to the support provided by SU’s College of Arts and Sciences, the regional competition is also supported by SU’s L.C. Smith College of Engineering and Computer Science, Technology Alliance of Central New York (TACNY), Syracuse Research Corporation, and the American Chemical Society.