Putting a Little Love into the World 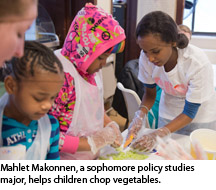 Six-year-old Amaree Green proudly holds up her paper mosaic heart after gluing on the final scrap of colored paper from the mounds of scraps scattered across the table. “How beautiful,” exclaims Syracuse University sophomore Gabriela Carrero, arts and crafts workshop coordinator for the Third Annual ’Cuse Spot at Wilson Park Community Center, being held Feb. 19-22 from 11 a.m.-1 p.m. and 2-4 p.m. each day.

About eight children, ages six to 10, gathered around craft tables tearing colored paper into ragged bits before gluing the bits to the hearts. When they return on Thursday, they will construct a picture of Earth. On Friday, they will surround the Earth with the hearts to create a paper mural that will grace a wall of the community center.  “It’s important for kids to know that with love, we can do a lot of things,” says Carrero, who also volunteers for the after-school program at Wilson Park. “The mural is a visual way of expressing the power of love.” Carrero is a sophomore dual major in The College of Arts and Sciences and the College of Visual and Performing Arts.

’Cuse Spot was co-founded three years ago by Sarah Walton, now a senior policy studies and geography major in The College of Arts and Sciences; and Christine Ward ’12, an alumna of SU’s College of Arts and Sciences and a current graduate student in public administration in the Maxwell School of Citizenship and Public Affairs. ’Cuse Spot is funded by Maxwell’s Public Affairs Program and a grant from SU’s Co-Curricular Fund.

With the help of some 40 SU students from across campus, Walton and Ward organize and host the four-day program at Wilson Park during K-12 February break. ’Cuse Spot consists of more than a dozen student-led workshops ranging from arts and crafts, photography and jewelry-making to workshops on languages and culture, computers, dance, drama and basketball.  Sixty-nine children are registered for this year’s ’Cuse Spot, which includes a hot lunch prepared by children enrolled in the cooking workshop.

On Tuesday, Allie Clarke, a freshman English education major (dual College of Arts and Sciences and School of Education), helped several children chop vegetables for a tossed salad while Wilson taught two girls to make Sloppy Joes. “I like to cook,” says Khaliah Frankin, age 10. “I sometimes help my mom,” a sentiment echoed by her cooking partner, Yasmine Breland, age 13. Walton helped the girls read the recipe and figure out how to measure each ingredient for the Sloppy Joes as the smell of browning meat and onions wafted through the room.

That smell was emanating from the kitchen where Marlei Simon, a junior nutrition major in the David B. Falk College of Sport and Human Dynamics, was working over a hot stove browning the ground beef. Simon developed the lunch menus for the entire week. Last Friday, Simon, Walton and Ward shopped for the food needed to feed 70 people a day for four days. “It was crazy, but we had Marlei’s menus and just went up and down every aisle until we had everything we needed,” Ward says.