Getting to Know: Amanda Claypool, a Champion for Dialogue on Divisive Issues 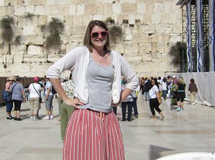 Amanda Claypool remembers the day the Twin Towers fell and the day U.S. warplanes bombed Baghdad as if it were yesterday. Those events shaped her academic career at Syracuse University, led her on a solo journey to Palestine’s West Bank over winter break and underscore her determination to provide opportunities on campus for student dialogue on divisive issues.

Claypool is a senior with a triple major in international relations, political science and history, and a minor in Middle Eastern studies in SU’s College of Arts and Sciences. She is also a student in the Renée Crown University Honors Program. She came to SU determined to study suicide terrorism with a goal of working in government.

“I was 10 when 9/11 happened,” says Claypool, who grew up in Horseheads, N.Y. “I understood what was happening as it was happening. I think that it was kind of my generation’s moment in history. For my grandparents’ generation it was Pearl Harbor; for my parents, it was the Cold War. For my generation, 9/11 has played an extremely important role.”

An intensive, two-week seminar in Israel; a semester in Washington, D.C., which included an internship with the American Task Force on Palestine; and a course in the Israeli-Palestinian conflict broadened her view and led her on a quest to better understand the roots of the Israeli-Palestinian conflict. “I was in Washington, D.C., when the Palestinian Authority was lobbying the United Nations to upgrade its status,” says Claypool, who went to committee meetings on Capitol Hill and listened to scholars at D.C.-area think tanks.

She asked the question: “What if you looked at the conflict from the Palestinian Authority’s capacity to function as a state instead of from a political point of view; could you gain any movement toward resolving the conflict?

It’s a pretty deep question for an undergraduate—one with which government leaders and policy analysts grapple. Undeterred, Claypool set out to find answers to the question for her Honors Capstone Project. That led her to dive into history to study the legal principles and theories of statehood from the writings of Karl Marx and Maximillian “Max” Weber and to look at the processes that led to statehood for Israel and Kosovo.

To learn about the Palestinian Authority’s preparations for statehood, Claypool resolved to talk directly with Palestinians. With the help of a Crown Award for travel expenses; her advisor Miriam Elman, associate professor of political science in the Maxwell School and The College of Arts and Sciences; and advice from faculty at SU’s Institute for National Security and Counterterrorism, Claypool arranged to travel to the West Bank and meet with more than 20 Palestinian academics and political leaders.

She traveled to Nablus and stayed at guesthouses near Ramallah, where she shared afternoon tea with the owners. “It was quite an experience,” Claypool says. “In Jerusalem, hostels are well populated. However, few people travel to the West Bank, so most of the time I was the only person in the guesthouse.” Claypool, who can speak Arabic well enough to ask for directions, says she never felt unsafe during her travels. “I was more scared of not being allowed into the country, if anything,” she says.

Back on campus, Claypool is an executive board member of LIME: An Israeli-Palestinian Dialogue Group that strives to get students talking about the issues. The group meets every Monday to discuss current events in the Middle East. Last spring, the group hosted Noa Baum, a nationally known, award-winning storyteller who told stories about her mother, an Israeli Jew living in Jerusalem, and about her mother’s best friend, an Arab living in Jerusalem. That event drew more than 100 guests.

This spring, the group is trying to organize a panel discussion on U.S. policy in the Middle East and the Obama administration’s second-term policy toward the Israeli-Palestinian conflict. The group hopes to facilitate a panel discussion between the College Democrats, College Republicans and another group on campus. The group is also working toward engaging Hillel and the Muslim Students’ Association in its activities.

“One of our goals is to facilitate conversations between individuals who would not otherwise talk to one another,” Claypool says. “We also want students to be knowledgeable about what is happening in the world.”

Claypool’s goal is to travel to Jordan after graduation to study Arabic. She aspires to work in the area of national security as a career analyst specializing in the Middle East.