A Bold Vision for a New York City Waterfront 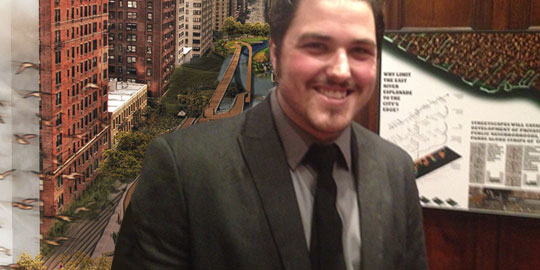 The East River Esplanade in Manhattan is a narrow, deteriorating pedestrian walkway, marked with sinkholes and neglected open spaces. School of Architecture student Joseph Wood G’14 saw potential in the site’s striking riverfront views and land-water connections—and judges in a design competition to transform the waterfront saw the potential in Wood’s creative vision to spark conversations about the possibilities.

Among more than 90 entries from 24 countries, Wood’s design was awarded first place in the Reimagining the Waterfront competition sponsored by nonprofit community action group CIVITAS. His designs, which include inland canalways and an ecological rebirth in the residential landscape, are featured in an exhibition in the 1870 Room of SU’s Lubin House in New York City through Feb. 28.

As part of an architecture studio course in fall 2011, Wood and the other students in the class were challenged with the competition’s real-world design problem: to propose bold new ideas that would ignite a discussion about redeveloping the esplanade. Entering the actual contest was optional.

“After the semester ended, I decided to work the design out a little more and enter it to see what happened,” Wood says. “I guess I kind of got lucky.”

Winners were announced last spring, and Wood’s work was featured as part of an exhibition at the Museum of the City of New York, where he was honored along with the second- and third-place winners and five honorable mentions.

A native of New Jersey, Wood often visits New York City, but he had never heard of the East River Esplanade. During the course, students toured an area of the esplanade, but Wood had already started to develop his ideas by reading about the area and its urban qualities, looking at Google maps and researching European cities that use canalways.

“There’s something about how New York City is all about water. It’s an island with historic, huge intricate water and sewer systems beneath it,” Wood says. “Most of the time when you’re in the city you don’t think about the water, so the thought was to convert a lot of the east-west-running streets into pedestrian canalways to redefine a city waterfront.”

Wood also considered the natural habitat and ecology, including native species of plants and animals, that could be redeveloped and the ability of the canals to help relieve stormwater runoff that typically overtaxes the sewer system during major storms. The concept of stemming flooding problems touched off further interest last fall after Hurricane Sandy, which forced river water into underground infrastructure.

“I think my design speaks to projects in general that address the edge of the city as more of a soft blend between water and the urban fabric, rather than a wall,” Wood says.

Although the idea of inland canals may not be economically feasible, the CIVITAS competition was ultimately about starting conversations among residents, thinking about the possibilities and generating strong backing for the future development.

“Maybe it was helpful that I was in school while doing this because I was not thinking about the most practical designs; I wanted to do something imaginative,” says Wood, who would one day like to work in New York City. “I don’t think they will necessarily use these designs, but perhaps they will take the ideas from it. I look forward to seeing what happens.”