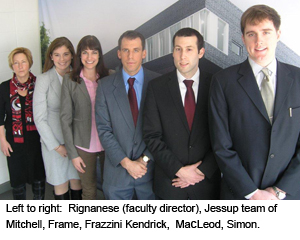 Coming on the heels of a championship win at the National Civil Trial competition in November, the SU College of Law advocacy program teams continue to deliver impressive results in regional and national tournaments.

Most recently, the SU Team finished in the final four at the Philip C. Jessup International Law Moot Court Competition Midwest Regional Rounds on Feb. 2-3. The team was awarded for their written submissions in the “Best Memorial” category, with third-year student, Shane Simon winning in the “Best Oralist” Category. Other team members include Benjamin Frazzini Kendrick, Natalie Mitchell, Kevin MacLeod and Tess Frame. The honors awarded to the team are much coveted marks of distinction, the Jessup Competition being the largest and most prestigious moot court competition in the world.

“Recognition of our team’s writing ability is especially important as writing is an essential and fundamental skill for any attorney,” says Lucille M. Rignanese L’99, faculty director of the Moot Court Honor Society and Advocacy Program. “Our students have consistently performed exceptionally well in this area.”