Understanding Effects of Exercise on Alzheimer’s 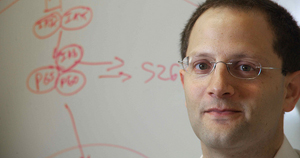 Exercise has been shown to help control weight, improve mood and reduce the risk of certain diseases. Stefan Keslacy, assistant professor of exercise science in the School of Education, is taking the research further with one specific disease—looking at whether exercise can stem the debilitating symptoms of Alzheimer’s disease and pinpointing a treatment that would mimic those effects.

His results have been promising.

Keslacy and his team’s research with mice has initially shown exercise can reduce plaques in the brain that are the hallmarks of Alzheimer’s. They are also identifying specific genes related to the effects of exercise, which might be developed as a gene therapy—manipulating gene expression in a patient to help fight disease.

“We’re trying to reproduce the effects of exercise, so we started to look at more of the mechanism behind the effect of exercise. We want to understand not only the physiological and cognitive effect but also to look at the cellular mechanism,” says Keslacy, director of the Exercise Biochemistry Laboratory. “I hope that we will find—maybe not a cure—but a treatment that would delay the symptoms in the future.”

Many scientists studying Alzheimer’s disease believe a “perfect storm” is brewing—baby boomers, a quarter of the population, are getting older and life expectancy is increasing. With age being the greatest risk factor associated with Alzheimer’s, epidemiological studies estimate the number of people with the disease could triple by 2050, Keslacy says.

In that not-too-distant future, 16 million people may have the disease at a projected annual health care cost of $1 trillion.

Keslacy’s research began a couple of years ago on mice that were created to reproduce some of the symptoms of Alzheimer’s disease. The mice developed plaques in the brain made up of a specific protein, beta amyloid. Humans develop these plaques, which are known to be associated with Alzheimer’s symptoms, including memory loss.

“We found that exercise was able to reduce not only the number of plaques in the brain but also the size of the plaques,” Keslacy says. There was further data that memory could also be improved by exercise. Additional research is confirming both sets of findings.

With those positive findings, Keslacy and his team of student researchers began looking into human research to run parallel to the animal research. However, they quickly realized an older person would not be able to exercise at the level and intensity that would be most beneficial, so research shifted to look at the effect of exercise on the cellular level.

The research is looking at gene expression associated with the immune system and inflammation to see what would imitate the effects of exercise. By accessing technology that screens for gene expression, the team has quickly seen the genetic differences between animals with Alzheimer’s that undergo exercise and animals with Alzheimer’s that are sedentary.

In the animals, they have been working on a gene therapy treatment to reproduce the effects of exercise—with a 60 to 70 percent effectiveness rate in some of the animals. “It’s not something we have completely finished—it’s a pretty long process, but it’s promising,” he says.

Research on humans has started by first trying to identify the genes associated with the benefits of exercise, since those found in mice would not necessarily match those in humans. About a dozen subjects have been brought into trials to undergo exercise for three months, with various testing done before and after, including blood samples, biopsies and cognitive tests. Some participants exercise at the Institute for Human Performance at SUNY Upstate Medical University and others have the exercise equipment brought to their homes.

Keslacy’s student team members continue to recruit participants, schedule and supervise the exercise, collect data and interpret data in labs at the Life Sciences Building. Keslacy expects the initial study will be complete by the end of the summer and that the data will have enough statistical power to begin pinpointing the human genes to work with.

“I’m hopeful that we will be able to do the research on a larger scale, because we need to recruit and gather more data before we can really see its potential,” Keslacy says.

Keslacy’s research is funded through a sub-pilot grant from the Center for Aging and Policy Studies at the Maxwell School of Citizenship and Public Affairs, through the center’s grant from the National Institute on Aging.