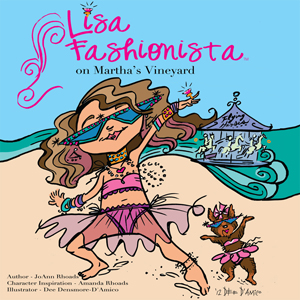 It may be a frigid winter in Syracuse, but one turn of the cover of a new book by Syracuse University’s JoAnn Rhoads places you on a summertime beach in Martha’s Vineyard, Mass., enjoying the magical adventures of Lisa Fashionista.

Lisa Fashionista is the title character in “Lisa Fashionista on Martha’s Vineyard,” published by Rhoads, senior buyer in SU’s Office of Publications and developed by a creative team of SU employees and alumni. Lisa is a spirited, school-aged girl who loves animals, friends and outrageous jewelry (so much so that she knows by heart where each of the 12 monthly birthstones comes from). Lisa spends each summer on Martha’s Vineyard with her beloved dog, Remy; her best friend, Olivia; and her Aunt Myrtle.

Although Lisa and Olivia love to spend their days combing the beach for shells and colored sea glass, digging for clams and hunting for sea treasures, they have a mission during this particular summer—to win a sand sculpture contest and donate their winnings to the island’s animal shelter. The girls do win the contest with the help of the Beach Plum Fairies—even after being spirited away to embark on some island adventures.

Rhoads was inspired to create Lisa Fashionista last January after flipping through the freshman-year sketchbook of her daughter, Amanda, a 2012 fashion design graduate of SU’s College of Visual and Performing Arts. Mother and daughter brainstormed a name for an adorable little girl Amanda had sketched, and “Lisa Fashionista” was born.

“We knew we could create a book and market this character through adventure stories that had educational information about fashion and jewelry for little girls,” says JoAnn.

They also saw the book as a way to emphasize the importance of helping the greater community, both in message and action. The Rhoads family has a summer home on Martha’s Vineyard, a small island off the coast of Massachusetts that has 7,000 year-round residents.

“The population and the shelter are too small to care for all of the animals that are turned in each year,” says JoAnn. “We decided the book should be about love for animals, and that the characters should help raise money for the shelter.” A percentage of the book’s sales will be donated to the Animal Shelter of Martha’s Vineyard in Edgartown, Mass.

Amanda and JoAnn collaboratively developed the book’s theme and characters, and JoAnn wrote the story. They chose Mary Beth Horsington, a writer and editor in the marketing department of SU’S University College, as the book’s editor. Horsington also has strong ties to Martha’s Vineyard. She was formerly on the staff of the island’s newspaper, the Vineyard Gazette, and has family who live there year-round.

Amanda interviewed more than five illustrators from as far away as California. One night, while on the Internet, she came upon the work of award-winning Central New York-based illustrator and VPA graduate Dee Densmore-D’Amico ‘81. Amanda’s vision and D’Amico’s illustration style were a perfect match, says JoAnn. Allison Michaud served as the graphic designer on the project, and incorporated cursive words throughout the book’s text to make the book more appealing to children beginning to read cursive writing.

Bringing Lisa Fashionista to life was a labor of love for the project team members. “Lisa came to life quite naturally and effortlessly,” says D’Amico. “JoAnn sent me a sketch, the story and filled me in on who Lisa is in her own words. I just started sketching and, voila, there she was! It really is something how characters are born … they are meant to be. They have a spirit and energy all their own and I simply set them free. I truly believe that.” More of D’Amico’s work can be found here.

“I loved working on the book—each time an illustration was created by Dee, it was like all of us had some sort of universal power together as a team,” says Amanda. “She produced images exactly as we imagined.”

Being a part of the team that brought Lisa to life has sparked career aspirations for Amanda. “With my fashion design background, my desire is to design for the children’s clothing market and create unique designs with a colorful European flair, just like what Lisa wears.”

JoAnn describes the development of the book, and the coming together of the SU-connected team, as “serendipity.”

“Reflecting back now, from the moment Amanda and I created the Lisa Fashionista character I would never have imagined that by the end of this whimsical journey, all five strangers would become friends,” JoAnn says.

Last summer, JoAnn was contacted for a signed copy of the book to auction at the shelter’s gala fundraiser. Since that time, she has received inquiries from a New York City-based producer about using the book as a prop in an upcoming movie. JoAnn, who self-published the book, is now looking for a publisher for this book and more of Lisa’s adventures on her quest for beautiful baubles. She also plans to extend the character into the greeting card market later this year.

“Lisa Fashionista on Martha’s Vineyard” is $9.99 and is available in the SU Bookstore for Valentine’s Day. The book can also be directly ordered by e-mailing Amanda Rhoads at arhoadsie@yahoo.com or JoAnn Rhoads at jarhoads29@yahoo.com.

For more information on Lisa Fashionista, visit Facebook at https://www.facebook.com/LisaFashionistasAdventures