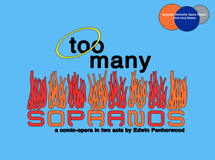 The Syracuse University Opera Theatre will present Edwin Penhorwood’s comic opera “Too Many Sopranos” Jan. 25, 26 and 27 at 8 p.m. in the Rose and Jules R. Setnor Auditorium, Crouse College. The work parodies the over-the-top caricatures from various opera plots.

In “Too Many Sopranos,” four sopranos wind up at heaven’s gates and are forced to audition for the heavenly choir. St. Peter, however is dismayed to discover that there aren’t enough spots in the choir for the four leading ladies. Instead, he accompanies the ladies into the Underworld to recruit some of opera’s former leading men and audition them for the choir.

Now in its 10th year, the SU Opera Theatre presents one full production a year in Setnor Auditorium on the SU campus. For more information about the opera or Setnor Auditorium concert status updates, contact the Setnor School at 315-443-2191.