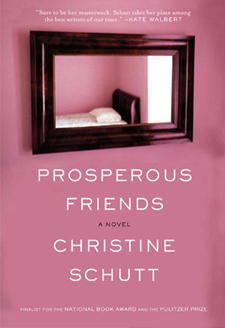 Award-winning novelist Christine Schutt, author of “Prosperous Friends” (Grove/Atlantic, 2012) will open the Spring 2013 Raymond Carver Reading Series at 5:30 p.m. Wednesday, Jan. 30, in Gifford Auditorium. The reading will be preceded by a question-and-answer session from 3:45-4:30 p.m. The event is free and open to the public. Parking is available in SU’s paid lots.

Author of two short-story collections and three novels, Schutt’s first novel, “Florida,” was a National Book Award finalist. Her second novel, “All Souls,” was a finalist for the 2009 Pulitzer Prize. According to the publisher, “Prosperous Friends” follows the evolution of a young couple’s marriage as it is challenged by the quandaries of longing and sexual self-discovery. Author Kate Walbert hailed the novel as a masterpiece: “Like Fitzgerald’s ‘Tender Is the Night,’ Schutt’s portrait of a young couple in ruins is exquisitely beautiful, stunningly resonant, and so minutely and vividly observed you feel devastated at its close. With “Prosperous Friends,” Schutt takes her place among the best writers of our time.”

Schutt has twice won the O. Henry Short Story prize as well as Pushcart and Mississippi Review fiction prizes. She is the recipient of the New York Foundation of the Arts and Guggenheim Fellowships and senior editor of NOON, a literary annual. Schutt lives and teaches in New York City.

Named for the great short story writer and poet who taught at SU in the 1980s, the Raymond Carver Reading Series is a vital part of Syracuse’s literary life. Presented by the Creative Writing Program in SU’s College of Arts and Sciences, the series each year brings 12 to 14 prominent writers to campus to read their works and interact with students.

Spring 2013 Series Schedule
The series will continue with the following authors. All readings begin at 5:30 p.m. in Gifford Auditorium. Question-and-answer sessions are from 3:45-4:30 p.m. Further information is available by calling 315-443-2174.

Feb. 13: Patrick Lawler, author of five collections of poetry and a new novel, “Rescuers of Skydivers Search Among the Clouds” (University of Alabama Press, 2012)

April 24: Diane Williams, award-winning short-story teller and author of seven works of fiction, including “Vicky Swanky Is a Beauty” (McSweeney’s, 2012).