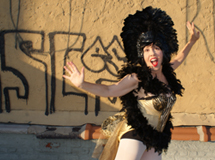 Cuban-American performance artist Carmelita Tropicana (a.k.a. Alina Troyana) will perform at 7:30 p.m. Friday, Feb. 1, at La Casita Cultural Center, 109 Otisco St., Syracuse. The performance is free and open to the public. Troyana will present “Border Beasts: A Performance Collage” about issues of cultural identity and citizenship.

Troyana’s performance is presented in collaboration with the 2012-13 Ray Smith Symposium, “Moving Borders: The Culture and Politics of Displacement in and from Latin America and the Caribbean.” The Ray Smith Symposium series is supported by a bequest to Syracuse University’s College of Arts and Sciences from the estate of alumnus Ray W. Smith ’21.

Tropicana’s performances, plays and videos have been presented at venues such as the Institute of Contemporary Art in London, Hebbel Am Ufer in Berlin, Centre de Cultura Contemporanea in Barcelona, the Berlin International Film Festival, the New Museum of Contemporary Art, Mark Tauper Forum’s Kirk Douglas Theater in Los Angeles and El Museo del Barrio in New York.

Troyana’s work has been supported by grants from the Independent Television Service, the Jerome Foundation and the Rockefeller Suitcase Fund. She has received numerous awards, including the prestigious Anonymous Was a Woman (2005), Outstanding Artistic Achievement from Performance Space 122 in New York City (2011) and an Obie Award for Sustained Excellence in Performance (1999). She has received fellowships from the New York Foundation for the Arts for both playwriting and performance art.