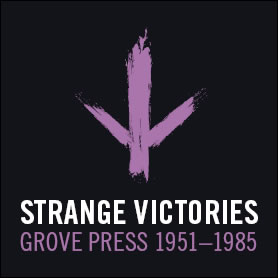 Founded by Barney Rosset in 1951, Grove Press became one of the 20th century’s great avant-garde publishing houses. What began as a small independent publisher on Grove Street in New York City’s Greenwich Village grew into a multimillion dollar publishing company that has been credited with introducing important authors from around the world to American readers during the postwar period.

Taking its cue from the 1948 film “Strange Victory,” which Rosset produced in collaboration with left-wing documentary filmmaker Leo Hurwitz after World War II, the exhibition traces the history and evolution of Grove Press, from its role at the center of national censorship trials over the first American editions of “Lady Chatterley’s Lover” and “Tropic of Cancer” to its publication of politically engaged works including “The Wretched of the Earth,” “Red Star over China” and “The Autobiography of Malcolm X” to its scandalous, and very profitable, “Victorian Library.”

Each book published by Grove, the exhibition reveals, was in its own way a “strange victory.” For while Grove altered the American literary landscape and its relationship to social mores, equality and freedom of expression, Grove also aggressively deployed savvy marketing strategies, became embroiled in labor union battles, floundered in its own success and offended the sensibilities of not only “squares,” but feminists, Marxists, academics and many others. “Strange Victories” tells the complicated story of Grove’s many literary and political achievements, whose profound influence on American culture endures today.

This exhibition, which runs until June 22, reveals the tremendous wealth of this newly available collection, and includes a series of public programs organized in conjunction with students and faculty from across the SU campus.

At 5 p.m. in the Peter Graham Scholarly Commons on the first floor of Bird Library, prior to the exhibit reception, Loren Glass, associate professor of English and with the Center for the Book at the University of Iowa, will moderate “Remembering Grove,” a panel discussion with former Grove Press employees, including Judith Schmidt Douw (foreign rights), Fred Jordan (editorial), Claudia Menza (the Evergreen Review), Nathaniel Sobel (sales) and Astrid Rosset (editorial). The exhibition, reception and panel discussion are free and open to the public.

“Strange Victories: Grove Press, 1951-1985” is part of the 2012–13 Ray Smith Symposium “Positions of Dissent,” co-sponsored by The College of Arts and Sciences, Humanities Center, School of Architecture, LGBT Studies and the departments of English, history, African American studies and art, design, and transmedia. For more information on the symposium visit www.dissent.syr.edu.