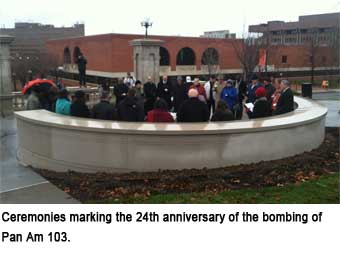 Two dozen people braved chilly temperatures to pay respects to the lives lost on Pan Am 103 on Friday, Dec. 21, the 24th anniversary of the terrorist bombing over Lockerbie, Scotland. Services were held at Hendricks Chapel and at the Remembrance Wall on the Syracuse University campus. Thirty-five SU students and a town of Clay couple were on board the flight, and were among the 270 who died. Candles were lit in their honor, and people at the ceremony spoke about embracing the light from the darkness. Services were also held at Arlington National Cemetery outside Washington, D.C.