A vote for Syracuse Poster Project—and local artists and poets 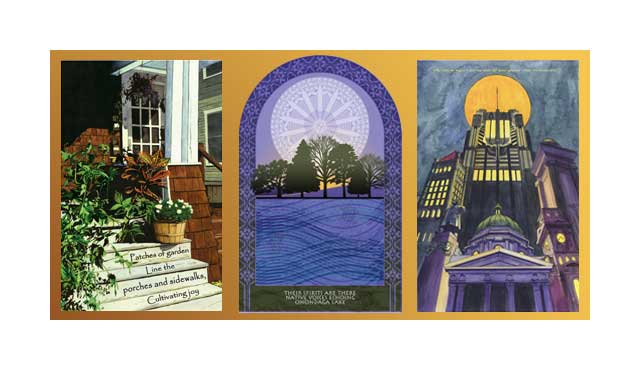 In 1992, the City of Syracuse received a federal grant for downtown renovations that included the installation of large-scale poster kiosks. Syracuse resident Jim Emmons, like many others, was excited about the prospect of having quality art in downtown, but was disappointed to find out-of-date event posters, if anything at all, inside the displays.

In 2001, Emmons got sick of waiting. He teamed up with College of Visual and Performing Arts professor Roger DeMuth and others to form the Syracuse Poster Project, a group that brings together community poets and student artists to create Syracuse-themed artwork for display throughout the city.

“I was aware of this tradition in Syracuse to have people write poems about the city,” Emmons says, recalling the annual Syr-Haikus contest started by The New Times in 1997. “I was also aware of the incredible art resources at Syracuse University, and I thought, ‘Maybe we can bring these two great traditions together.’”

Every year since, the group has filled the formerly neglected kiosks with the locally inspired art and poetry that Emmons and others had hoped for, giving local artists a way to showcase their talents.

“As students at SU, I think it’s easy to get trapped up on the hill and forget that we live in a culturally diverse city,” says Walker Kampf-Lassin, an advanced illustration student whose poster was chosen for the 2013 series. “Through a project like this, we—the students—get to learn about the city,” the Chicago native says, “and we also get to contribute to Syracuse’s burgeoning art scene.”

This year, the Central New York Community Foundation is celebrating its 85th anniversary by awarding $8,500 to four projects aiming to better the quality of life in the region. The first three “CNY85 Giving Project” grants have been awarded, but voting is still open for the fourth category: Arts, Culture, Recreation and Civic Engagement.

The Syracuse Poster Project’s proposed initiative, “New Americans,” would create packs of notecards featuring the most popular Syracuse-inspired poster art. These packs would also include information about local arts and culture groups, and they would be given as gifts to individuals receiving their citizenship certificate in the Syracuse area. It would function as an introduction to the city, Emmons says, but would also echo the project’s mission of sharing local art with the community.

The proposal that gets the most votes will receive the grant. To vote for the Syracuse Poster Project’s “New Americans” proposal, visit cny85.org and click “vote.” Individuals can vote once per day for the entire month of December.

As with the idea for the “New Americans” initiative, the Syracuse Poster Project reaches into the community for its inspiration. Each summer, the project is kicked off with an open call for Syracuse-inspired haikus written by members of the community. Since The New Times discontinued the Syr-Haikus contest in 2006, The Poster Project has begun hosting its own. This year, 64 poets submitted 147 haikus for consideration.

The best poems are written on slips of paper—like “Chinese cookie fortunes,” Emmons says—and the 26 students in DeMuth’s Advanced Illustration class are each given a handful. They choose the poem that speaks to them and then create a poster to illustrate it. Then, in November, the 16 best designs are chosen for the following year’s series.

Heather Ryerson, another student artist chosen for the 2013 series, says the project is a mutually beneficial way to break down the “ivory-tower mentality” that can make art inaccessible. “I think it’s very important for Syracuse University and its students to be a part of the city,” the senior from Oneida, N.Y., says. “Community members should be able to see the work students are doing.”

This story was written by Melanie Deziel G’13, an arts journalism master’s student in the Newhouse School of Public Communications, and an intern with Syracuse University Magazine and the Office of Publications.