Mary-Jo Robinson, a senior psychology and policy studies major in Syracuse University’s College of Arts and Sciences, had what she describes as a “crazy epiphany moment” during a class on food justice with guest speaker Michele Jordan from the Interreligious Food Consortium of Central New York (CNY): Organize an invitational a cappella concert to benefit the Food Bank of CNY.

Robinson and four other students enrolled in “Food Stories,” a Renée Crown University Honors Program course, formed Group 4 Hunger Relief. The group joined forces with Main Squeeze, a student a cappella group, to host the benefit concert on Saturday, Dec. 1.  The concert begins at 7:30 p.m. in Hendricks Chapel. Tickets are $4 with a student I.D. and $6 for the general public. Additional donations will be accepted at the event.

The concert will feature performances by SU student a cappella groups Main Squeeze, Orange Appeal, Otto Tunes and Redemption; SUNY College of Environmental Science and Forestry’s Ecotunes; and a vocal jazz ensemble from Nottingham High School, as well as a brief discussion of hunger-related issues presented by Group 4 Hunger Relief.

One of the requirements for “Food Stories,” which was taught for the first time this fall, is a group project that involves community and/or campus activism around a food issue. The course is taught by Jolynn Parker, associate director of undergraduate studies in the Department of English in SU’s College of Arts and Sciences. “The students worked really hard on their projects,” Parker says. “They came up with some very creative ideas.”

In addition to food justice, students studied the global industrial food system, organic farming and community-sponsored agriculture, food foraging, food controversies and food attitudes. Class field trips included a guided foraging walk in Oakwood Cemetery, where the students collected edible plants to cook and eat, and then wrote about the experiences; and trips to the CNY Regional Market, Grindstone Farm (an organic farm in Pulaski, N.Y.), The Syracuse Real Food Co-Op and the SU Commissary.

Robinson, a member of Main Squeeze, says doing a concert was the right fit for her group. Leading publicity efforts is Jessica David, a senior advertising major in the S.I. Newhouse School of Public Communications; finances fell to Tyler Wasserman, a junior dual major in sport management and finance in the David B. Falk College of Sport and Human Dynamics and the Whitman School of Management. College of Arts and Sciences students Katie Latrenta, a junior chemistry and forensics major, and Gina Kim, a sophomore biology and neuroscience major, are attending to other organizational details (fundraising, posters, online promotion, etc.).

The Group 4 Hunger students took the course because it either fit their schedule or they needed to fill a humanities requirement. They had no idea what they were getting into.  Now they say it’s among the best courses they have taken at SU. “The course made me question everything I thought I knew about food,” Latrenta says. “When I went home for Thanksgiving, I kept asking my Mom if she actually knew what she buys for us to eat.” 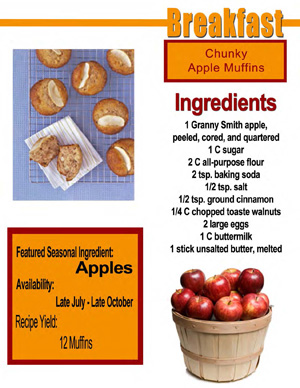 In addition to the benefit concert, other “Food Stories” projects include a student-created cookbook, “Campus Cooking: Syracuse in Season,” with menus and recipes highlighting seasonal produce found in New York State, and “Rot or Not,” a food exhibit in Bird Library.

“Rot or Not” was designed to educate students on local vs. global food, food mileage and food politics through images of food decomposing over time. The exhibit included three meals, one made with food from the CNY Regional Market, one from the SU dining hall and one from McDonald’s. The food was left for two weeks under glass. At the end of two weeks, the regional food was covered in mold, while the McDonald’s fries still looked as fresh as they did on day one.  The project was put together by College of Arts and Sciences students Carla Licata, Sarah Wilkins and Natalie Rebeyev; Rodney Fleming in the Whitman School; and Jacob Perrin in the Falk College.

“It’s been so much fun to teach this class,” Parker says. “I’ve learned as much as the students. I think the course has changed how we think about food, and what we eat and buy.”