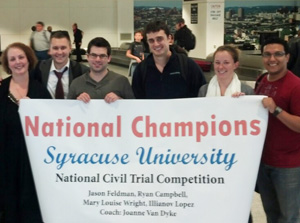 “This was an outstanding victory for our trial team, coaches and the College of Law—one of which we can all be proud. We look forward to being the home of the NCTC Championship Cup for the next year,” says Lucille Rignanese L’99, faculty director for the Moot Court Honor Society and Advocacy.

Each law school that participated in the competition sent a team of four students currently enrolled in the Law School’s J.D. program. The teams were required to act as witnesses and advocates, and had to argue both sides of a hypothetical civil lawsuit based on a real-life unlawful violence and unlawful termination case, where an actress alleged that she was struck across the face by her show’s creator and was terminated shortly after making a formal complaint to studio executives.