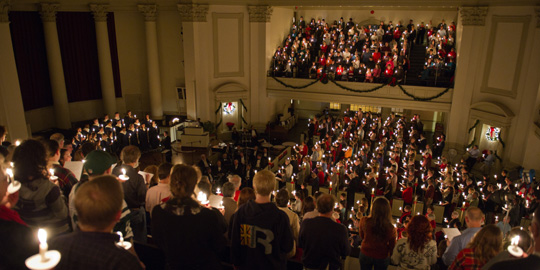 The concert will begin in the chapel at 7:30 p.m. and is free and open to the public. Those attending are asked to bring a nonperishable food item; items collected will be donated to those in need in the greater Syracuse community. Monetary donations will also be accepted to help offset student costs for the Hendricks Chapel Choir’s tour of Germany and Poland in the spring.

Through a unique collaboration between SU and WCNY, the 90-minute concert will again be broadcast in late December by WCNY on both television and radio.

The concert will also be broadcast on WPBS in Watertown on Dec. 23 at 2:30 p.m. and on WSKB in Binghamton at a time to be determined.

During the concert, the three groups will perform both individually and in combination. They will be joined by Anna Petersen Stearns on oboe, Bill DiCosimo on piano, Willie Santiago on flute and Bruce Paulsen from WCNY-FM on voice. The Chapel Choir will be directed by John Warren, the SU Brass Ensemble by James Spencer and the handbell ringers by Emily B. Cirillo.

The groups will combine to perform “Sussex Carol” and “O Holy Night.” Community sing-alongs will feature “Let It Snow!” and “Winter Wonderland.”

The Brass Ensemble will perform “Infant Holy,” “Fire in the Blood,” “How the Grinch Stole Christmas” and “The Most Wonderful Time of the Year.”

Stearns and Owolabi will perform “Concerto in Bb Major, Op. 7, No. 3.”

The concert will close with the traditional candle lighting and singing of “Silent Night.”

The Brass Ensemble, part of SU’s College of Arts and Sciences, is composed of members of the SU faculty, staff and students, the SUNY Upstate Medical University faculty and staff, and accomplished musicians from surrounding communities. The national award-winning Brass Ensemble presents about 18 performances per year. The ensemble’s repertoire includes music from all major musical periods and often features new compositions commissioned by nationally known composers.

The Hendricks Chapel Handbell Ringers ensemble is a group of students, faculty and staff from the SU community. The ensemble rings five octaves of Schulmerich handbells and four octaves of Schulmerich MelodyChimes. The Handbell Ringers perform at the Protestant worship services in the chapel throughout the academic year, as well as at other churches and venues throughout Central New York.

DVDs of the 2011 Holidays at Hendricks performance are available in the SU Bookstore.

For more information on the concert, contact Hendricks Chapel at 443-2901.