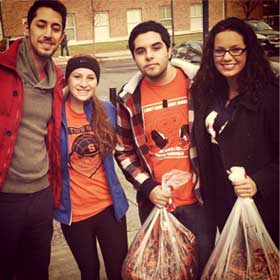 Students worked in the gardens at Thornden Park as part of Impact Week.

About 100 students spread out into the community over the past week to make an impact—and see the city beyond the campus. They cooked dinner at the Ronald McDonald House, spent time with children at the Salvation Army, collected toiletries for Vera House and did some cleanup in Thornden Park.

It was all part of the Student Association’s first-ever Impact Week between Nov. 5 and 12.

“We really think that community service—along with Chancellor Cantor’s idea of Scholarship in Action—should be a part of the student experience in college,” says Student Association Chief of Staff Janine Savage ’14.

It’s also about students as citizens, an idea that emerged from discussions with staff from the Mary Ann Shaw Center for Public and Community Service. “They stressed to me that students are not only university residents, they are also citizens of this city,” Savage says. “Being citizens of this city means taking the time to see what needs there are in the community and helping out sometimes.”

Savage, who was the primary coordinator of the event and worked with Vice President Allie Curtis ’14 in setting up the projects, says the commitment to service came up last year when SA President Dylan Lustig ’14 talked about doing a day of community service. The idea soon grew into a full week to allow for more students to be involved and open it up to student organizations on campus that could also plan to do something with a nonprofit organization with which they are affiliated.

Along with the 60 SA representatives who participated in the service projects, about 30 organizations planned their own events to take part in Impact Week. Students also took part in Dome Donation Day, helping collect food and monetary donations for the Salvation Army at the SU vs. Louisville football game, and served the dinner meal to about 200 people Friday at the Samaritan Center, which provides daily meals to those in need.

The Samaritan Center utilizes about 800 volunteers a month and the SU students were appreciated, says Julie Gilbert, resource and referral specialist there. “They were phenomenal. They got here and they were ready to go,” she says. 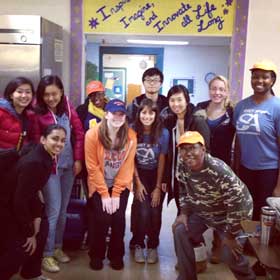 Students take a break while helping serve dinner at the Samaritan Center.

“The most important thing that you can learn in college is that the world is a much bigger place than we think,” Gilbert says. “When SU students come to the Samaritan Center, they see a side of the city that isn’t always a popular one to see. But they notice how people come to different circumstances and that the world isn’t always so full of dividing lines—that there’s a lot more that we have in common than what separates us.”

As Impact Week was under way, other students were interested in joining in the events—something that might help the event gather momentum for next year. “I’m really excited for it to continue next year because now people know about it and they can expect it—and it can grow every year,” Savage says.

There were other effects too. “I had one SA representative who went to the Salvation Army to work with the kindergarten class. She immediately came back and said ‘I loved it there and I want to keep doing it,’” Savage says. Another impact was the ability for SA representatives to work alongside other students—their constituents—to hear their concerns and possibly address them.

The final event was participating in the Veteran’s Day roll call at Hendricks Chapel, where volunteers read out the names of more than 6,000 military men and women killed since the terrorist attacks of 9/11. Savage took part in the roll call.