Empowering young people an ocean away 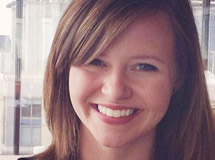 Emily Ballard ’15 came to SU from California, excited about the political science program and determined to make a difference. She didn’t predict she’d be helping to change lives in the Democratic Republic of the Congo.

As a first-year student, she reached out to Orange Impact, a coalition of philanthropic organizations with Syracuse University connections, looking for volunteering opportunities. She wanted to find organizations that would help her get hands-on experience in public policy and social entrepreneurship.

Shortly after, she was contacted by the Congo Leadership Initiative (CLI), a national nonprofit that facilitates youth leadership training in the Democratic Republic of the Congo (DRC). She admits that she didn’t know much about the DRC, which has struggled to recover from a civil war that ended in 2003 and claimed millions of lives. “Before I became involved, I really didn’t know what was going on in the Congo,” Ballard says, “But now I’ve got so much passion for working in that area and making a difference.”

Ballard works as the deputy director of CLI—not of a student chapter or individual initiative, but of the entire national organization, which was founded in 2010 and is based in Orchard Park, N.Y. Through fundraising, awareness campaigns and behind-the-scenes coordination, Ballard and the others in CLI are helping those in the war-torn Congo help themselves.

“We really don’t want to be a Western organization pushing our ideas of what leadership is on them, so we have Congolese leaders and mentors there,” Ballard says. “Everything on the ground is them.”

Each summer since 2010, those Congolese mentors in Kinshasa choose 16 of the area’s brightest and most motivated young people—eight boys and eight girls—to take part in a yearlong program called the Leadership Institute. Through seminars, workshops and other training, these young people are given the resources to become community leaders, expanding CLI’s reach to hundreds of young people throughout the Congo.

“I know the majority of these young leaders will become mentors too. They’ll go out in their community, start a club, write a book,” Ballard says. “That’s why I really like CLI, because it gives them a space to sit and talk about change and how they can make it happen.”

But the students in the Congo aren’t the only ones who can make a difference, Ballard says. In September, Ballard gave a talk as part of the Maxwell School’s Conversations in Conflict Studies series, encouraging Syracuse students to get involved by talking about the direct impact they can have through organizations like CLI.

“I was just looking for a volunteer opportunity, but it turned into this amazing process and experience,” she says. “I just reached out and let it take me. And that’s what a lot of students should take out of this, that they can really do the same thing—probably even better—if they just reach out and try.”

Ballard is also the vice chair of the Student Association’s Public Relations Committee and a member of STAND, a student anti-genocide organization. Ballard worked with STAND on the Conflict Free Campus Initiative, which aims to raise awareness about the minerals in our technology that come from war-torn areas. Because all of these organizations are so interwoven, Ballard says she is able to have a greater overall impact.

Ballard plans to increase her involvement in the specific projects she is already passionate about, like CLI and the Conflict Free Campus Initiative, and continue her involvement after graduation, she says.

“One of the great things about CLI is that we are all very young and determined to actually make a change,” Ballard says. “But we also realize this is a long-term issue. These young leaders need time to grow up and have an effect on the community. It’s not going to happen overnight, and I want to be around and involved to see it through.”

Melanie Deziel G’13 is an arts journalism master’s student in the Newhouse School of Public Communications,  and an intern with Syracuse University Magazine and the Office of Publications.