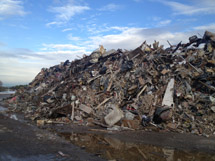 It’s mountains of trash and debris, and will take an equally mountainous effort to remove it from New York City, and communities on Long Island and New Jersey.

The trash is what’s left in the wake of Sandy, the storm that claimed dozens of lives, and caused billions in destruction. Now, the cleanup is well under way.

“EPA Region 2 (there are 10 EPA regions) has developed a level of confidence in SU, the Center of Excellence and the EFC,” said Lichtenstein before gearing up to tour some of the storm-damaged area. “EPA is aware of what we’re capable of doing.”

Lichtenstein says there is a lot of work to be done, and says one EPA official summed it up this way: “Imagine taking an entire house, and crushing it,” he said. “The TV, bedding, carpet, toiletries, appliances, clothing, wood, food, paint cans, everything, and putting it into a large mixing machine.” That’s what much of the debris looks like. Making the cleanup even more difficult is the likelihood that raw sewage, petroleum and chemical products from the flooding are permeating some of the debris.

All of the trash and debris from NYC, according to Lichtenstein, is currently being carted to three staging areas. “New York City is around 400 square miles,” says Lichtenstein, “and while not all of the city was affected by the storm, imagine the amount of debris we’re talking about here.”

He described the debris piles as ‘mountainous’. He’s working with the EPA, New York City, Army Corp of Engineers, state officials and others to implement ways to reduce the shear amount of debris being sent to landfills through the reuse of viable materials and maximizing recycling. “What we would like to do at those staging areas,” Lichtenstein says, “is to capture woody items, appliances, electronic waste, valuable metals and various forms of household hazardous waste.” Lichtenstein says it’s too much, too inconsiderate, to ask of storm victims right now to sort the materials themselves, as they clean up and remove debris from their apartments, homes, businesses and property. “The last thing anyone wants to do,” he says “is make life more difficult for them.”

New York City, of course, is not alone in its challenge to clean up and find a place for all the debris. And Lichtenstein says there will most likely be a secondary wave of debris and waste, as people start rebuilding and remodeling.

“The Hurricane Sandy debris management team, including many local residents, is focused on making this the ‘greenest disaster relief effort in the history of the nation.’” That’s the charge from the EPA, one that Lichtenstein applauds and supports, but calls “daunting, to say the least.”

“It’s a nearly insurmountable challenge” says Lichtenstein, “but a challenge that is being faced head on, as the lengthy cleanup process continues. Everyone involved is focused on making a positive difference.” 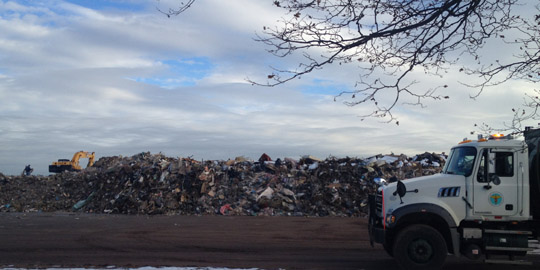