Ron Brownstein talks about politics, then and now 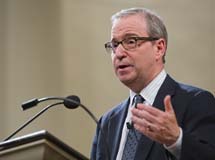 It was the proverbial line in the sand, and rarely crossed. And according to political journalist Ron Brownstein, it went something like this: “Those who worked with their hands voted Democrat,” he said. “And people who wore suits, would vote Republican.”

Brownstein brought his views and opinions to Hendricks Chapel recently, as part of the University Lectures series, for a speech in which he dissected the political process along with the mindset of today’s voter. It’s a mindset that started to shift in the 1960s, Brownstein said, when the GOP introduced a more ‘socially conscious agenda’, while the Democrats began to pick up votes among those with a college degree.

So what does that mean for the election this year?