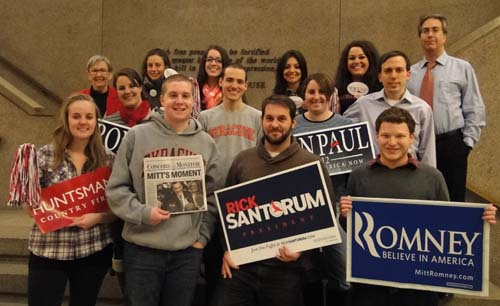 “A presidential election—and such a close one—is the perfect time to capture glimpses of what’s happening on Election Day in many communities,” says Charlotte Grimes, the Knight Chair in Political Reporting at the Newhouse School and one of the co-directors of the project. “We wanted to share the democratic experience locally and across America.”

Starting at 5 a.m. Tuesday, student-journalists will visit more than 60 polling places to talk to voters, poll workers and cover the candidates. While much of the reporting will be available on the “Democracy in Action” website, stories will also be used by local media organizations such as the Post-Standard, WRVO, WAER and Z89 radio. Twitter coverage will use the hashtag #diacny.

“The biggest challenge for students is simply the pressure of working under deadline,” Grimes says. “Many tell us afterward that the Election Day project is one of their most rewarding and inspiring experiences at the Newhouse School. They value it as real-world reporting.”

Graduate student Janine Mack and Liz Sawyer ’14 agree. Both Mack and Sawyer are enrolled in Grimes’ political reporting course and have been working all semester on the companion Democracywise website, a resource that helps newcomers to politics get acquainted with candidates and issues. In this course, which includes graduate and undergraduate students, students are randomly assigned a candidate to report on for the duration of the semester.

“It’s been a learning experience to see how campaigns operate and to learn what goes into making a campaign successful,” says Mack. “Tom Miller, County Court Judge candidate, doesn’t just shake hands,” Mack says. “He is active in the community and attends as many local events as possible.”

Sawyer has been following Ursula Rozum, Green Party candidate for the 24th Congressional District, all semester. Of the many lessons learned working on Democracywise, Sawyer says she’s discovered the importance of being observant. “I remember one interview with Rozum in a local coffee shop where she sat and painted her nails green,” Sawyer says. Since then, she’s had several opportunities to interview the candidate.

“I know I am following local politics a lot more because of this class,” Sawyer adds.

And that, Grimes says, may be the most important result of all. “In the end, the students may not care much for politics, but with this project they get to see how voters cherish their right to vote and what democracy means to them,” she says.

That lesson is an education in itself.

Emily Pompelia, a work-study student in the Office of News Services, contributed to this report.