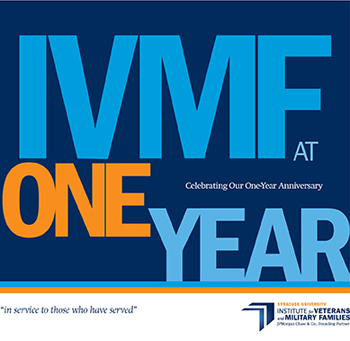 This week, the Institute for Veterans and Military Families (IVMF), founded in June 2011 by Syracuse University as the result of a historic partnership with JPMorgan Chase & Co., celebrates the one-year anniversary of its founding and formal ribbon-cutting/opening of its physical location on the SU campus in the University College Building, 700 University Ave., Suite 303. In recognition of “IVMF At One Year,” and as part of national Veterans Day/Week observances, the institute will hold a free, public open house from 1-3 p.m. on Friday, Nov. 9. The event is also part of Orange Central 2012, the University’s annual homecoming and reunion weekend for alumni and friends.

The first institute of its kind in the nation, the mission of the IVMF is to leverage the intellectual, programmatic and human capital resources of higher education in support of the post-service life course of the nation’s veterans and military families. Specifically, the IVMF focuses on developing impactful programming, cultivating actionable research, conducting policy analysis and providing technical assistance positioned to address the social, economic and public policy challenges facing the veterans’ community. The IVMF team approaches this mission as a collaboration, forging enduring partnerships with government, private industry, institutions of higher education, philanthropic organizations and other stakeholders committed to supporting transitioning service members, veterans and their families.

“Syracuse University is an institution with a long and proud history of service to and support of active military, veterans and military families dating back to the post-World War II GI Bulge. Since our founding just one year ago, the IVMF team has worked tirelessly to introduce new programs, research and collaborative engagements across the private and public sectors with a laser focus on a singular goal: to empower America’s veterans to realize their full potential as individuals and citizens of the nation they defended while in uniform,” says IVMF executive director and founder Mike Haynie.  “To realize that goal, we have seen our staff grow from a handful of people bound by a common cause and personal commitment to the mission, to a robust team of more than 30 professional staff and student interns working collaboratively to honor and support the men and women who have served this great nation. Our efforts and outcomes in only one year’s time have been significant, and have impacted the cause of veterans on a national scale. Yet, we know this is only the beginning. We have a historic opportunity and obligation to support and empower this nation’s next ‘Greatest Generation’.”

Acting as a bridge between the veteran community and public and private programs positioned to create employment and vocational training opportunities, in the last year the IVMF has provided invaluable resources and support services to assist the veteran community with the identification and pursuit of employment post-service, working with founding partner JPMC and additional stakeholders. The work has focused largely on leveraging skills and experiences gained in military service to develop strategies and share best practices to recruit, assimilate, retain and advance veterans and military families in employment. In addition, the IVMF’s prominent positioning in the veterans space has made the institute an attractive platform and partner for stakeholders to make public announcements regarding programs, services and legislation impacting veterans and military families.

The IVMF conducts, funds and disseminates academic research relevant to veterans and their families. It has created and empowered a network of IVMF Fellows who are world-class scholars representing academic institutions across the U.S. whose broad and extensive expertise is positioned to inform the social, economic, educational and policy issues impacting veterans and military families and the nation. Since its inception, the IVMF has published more than 40 weekly Research Briefs on employment, education, wellness and family on issues relevant to vets and military families, including publications from IVMF Fellows. Briefs are posted online and shared with a variety of academic, government, nonprofit, NGO and VSO stakeholders.

The institute has the capability to reach close to 180,000 constituents through its social media network of 13,135 (Facebook, Twitter, Google + and LinkedIn) followers. The national leadership position the IVMF has assumed in the veteran community is reflected in the role the institute has played over the last year in supporting and contributing to widespread media coverage of the issues impacting veterans and their families. IVMF staff regularly serves in an advisory capacity to reporters at outlets across the country as related to their ongoing coverage of veterans’ affairs. The IVMF leadership team has authored and placed several important op-eds on veteran issues including placements in The New York Times “At War” Bog, New York Daily News, Chronicle of Higher Education, Los Angeles Times, Stars and Stripes, Christian Science Monitor and Huffington Post. In addition, the IVMF regularly provides feature commentary and expert analysis for national television and radio broadcasts.

In addition to the “IVMF At One Year” celebration, members of the IVMF team will take part in a number of Veterans Day/Week activities across the country.

In addition to the “IVMF At One Year” celebration, members of the IVMF team will take part in a number of Veterans Day/Week activities across the country:

• Nov. 5: IVMF managing director and co-founder James Schmeling participated in a reception hosted by the commanding general of the 10th Mountain Division at Ft. Drum in honor of Sgt. Major Bryan Battaglia, senior enlisted advisor to the chairman of the Joint Chiefs of Staff;
• Nov. 7: Haynie, in New York City, speaks to JPMC employees regarding corporate culture and supporting veterans as they make the sometimes discontinuous transition from military to civilian life; remarks will be broadcast to all JPMC operating locations across the nation;
• Nov. 7: the IVMF will be at Google to discuss further support of veterans through employment, self-employment and education;
• Nov. 8: the IVMF participates in the Bob Woodruff Foundation’s Sixth Annual Stand Up For Heroes event in New York, the foundation is an IVMF partner in relation to the institute’s self-employment programs for veterans and military family members;
• Nov. 8: the IVMF hosts a convening of the National Coalition for Homeless Veterans and the U.S. Dept. of Labor in Washington, D.C., focused on homelessness and supportive service for veterans and their families;
• Nov. 9: the IVMF hosts an open house and celebrates the one-year anniversary of its official ribbon-cutting on the SU campus;
• Nov. 10: 35 members of the IVMF team (staff, student interns, SU student-veterans and family members) participate in the New York City Veterans Day Parade, the largest in the nation, with an institute float, in addition to two PSAs about the IVMF that will air during the live national broadcast of the parade on MyNetworkTV (owned by FOX);
• Nov. 13-14: the institute participates in the Chamber’s Hire Heroes Summit in D.C., Haynie will take part in an industry panel on transitioning veterans to the civilian workforce and with Schmeling will take part in the wards gala;
• Nov. 14-15: the IVMF takes part in Newsweek’s Heroes Summit 2012 in D.C.; Haynie participates in a panel discussion.

To learn more, visit vets.syr.edu and click the “IVMF At One Year” feature box.