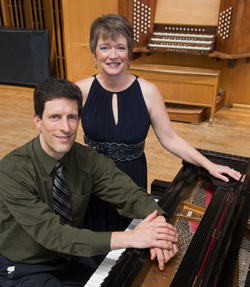 Soprano Janet Brown and pianist Fred Karpoff, both faculty members in the Rose, Jules R. and Stanford S. Setnor School of Music in the College of Visual and Performing Arts, will present a recital on Saturday, Nov. 10, at 8 p.m. in the Rose and Jules R. Setnor Auditorium, Crouse College. The program will include songs by Handel, Richard Strauss, Barber, Musto and a sonnet for the piano by Liszt.

Brown has been praised by critics for her warm, clear voice and direct expression. Richard Dyer of the Boston Globe has called her “… one of our most treasurable artists.” She is equally at home on the concert and operatic stages and has premiered works by composers Gunther Schuller, Andrew Imbrie, Philip Glass, Nicolas Scherzinger, Edward Cohen, Howard Boatwright and Ernst Bacon. In addition to her critically acclaimed CD release of selections from “Spanisches Liederbuch” of Hugo Wolf, she can be heard on the recording “Fond Affection: Music of Ernst Bacon.” Learn more at janetbrownsoprano.com.

Karpoff is the 2011 winner of the Frances Clark Keyboard Pedagogy Award presented by the Music Teachers National Association for the “3-D Piano Method,” a multi-DVD series and book on a whole-body approach to piano playing and teaching. He presents workshops and master classes throughout North America and has performed as both soloist and collaborative pianist on four continents, including prominent venues in Germany, Luxembourg, Belgium, Ghana, Zimbabwe, Ireland, Finland, Italy, China and the United States. As guest artist at major music festivals in the U.S. and Europe, he has collaborated with many of America’s foremost musicians. Learn more at fredkarpoff.com.

For more information or Setnor Auditorium concert status updates, contact the Setnor School of Music at 315-443-2191.