A vote for citizenship

Whether in a perceived blue state, red state or swing state, every vote matters in the U.S. presidential election, but not for the reason you might think.

One vote doesn’t decide the fate of a nation. Its greater meaning is in the vital act of citizenship, says Robert McClure, Chapple Family Professor of Citizenship and Democracy Emeritus at the Maxwell School.

The media and the campaigns create drama around the “battleground states,” where neither party’s candidate appears to have a majority to assume that state’s Electoral College votes. So they focus their efforts in those states that could go either way and not in historically Democrat or Republican stronghold states. In turn, people may question why should they vote if their state has already been deemed to have a majority for one party—but that mindset doesn’t hold water for McClure.

Even one vote in the highly contested 2000 presidential election between Democratic candidate Al Gore and Republican candidate George W. Bush would not have made a difference, says McClure, who teaches “Democratic Political Leadership.”  The race came down to a recount of votes cast in Florida and a Supreme Court decision.

“Voting is not about whether or not I will make a difference. It’s about an obligation we all have to participate in a collective effort,” McClure says. “I vote because I am obligated as a citizen of this society to give my consent to be governed by the outcome.”

And even though criticized by some as taking away from the democratic process, the emphasis on swing states does have its benefits. With swing states up for grabs in the electoral process, campaigns make a rational decision to focus their efforts, McClure says. If there were no Electoral College but only a popular vote, campaign costs, which are in the billions of dollars, would increase, and a recount situation might be even more contentious and complicated than in 2000. 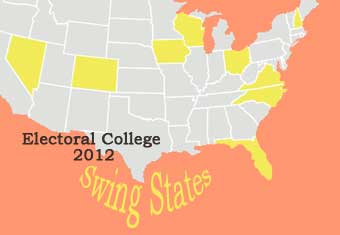 The Electoral College process allows a candidate’s political party to select electors in each state based on that state’s congressional number of representatives. When voters select a president, they are actually selecting that party’s electors, and in most states, whichever candidate wins the most votes will collect all of that state’s electors.

“At least now if we think there’s a problem, we can isolate it to a state or two,” he says. “What if we had to recount the whole of the United States if we had a popular vote?”

In a case where there might be a tie in the Electoral College, each state’s delegation in the House of Representatives would cast a vote to determine the presidency. The Senate would choose the vice president.

Other contested races occurred in 1876, when an independent commission decided that Rutherford Hayes won by one electoral vote, and in 1888, when William Harrison won the Electoral College but lost the popular vote to Grover Cleveland.

When the U.S. Constitution was envisioned, the delegates knew how to run an election, but in districts no larger than a county. “We can’t impose the standards of modern America on the folks in 1787,” McClure says. “How were they to envision the mechanics to elect a president by nationwide popular vote? They came up with this compromise at the very end after having gone through all sorts of alternatives.”

The U.S. constitutional system, which includes the Electoral College, has served us reasonably well for 225 years, McClure says. “Could we envision something better? Maybe. Would it work better? I have my doubts.”