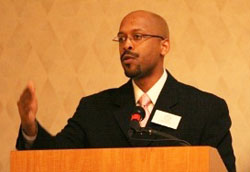 National political commentator and scholar Adolphus Belk Jr. ’97 will present “How I Got Over: Lessons from One Man’s Journey to Success,” 5-7 p.m. Thursday, Nov. 15, in 219Sims Hall.

The lecture is part of the 2012 Fall Colloquium series presented by the Department of African American Studies in SU’s College of Arts and Sciences and is free and open to the public. Reduced-rate parking is available in SU’s Booth Garage.

Belk, an associate professor of political science and African American studies at Winthrop University, South Carolina, has provided political commentary on South Carolina politics for both PBS and the Washington Post.  His research and teaching interests include American government, race and ethnic politics in the United States, and the politics of mass incarceration and public policy. His research has been published in the Journal of Race and Policy and by the Joint Center of Political and Economic Studies in Washington, D.C. He served as a guest editor for a special issue of the Journal of Race and Policy that examined the implications of the 2008 presidential election on race, racism and public policy and is working on a book-length manuscript analyzing the politics of the American prison-industrial complex.

Belk holds a B.A. in African American studies and political science from SU’s College of Arts and Sciences and both a master’s and Ph.D. in government and politics from the University of Maryland, College Park. Belk is a member of several organizations, including the American Political Science Association and the National Conference of Black Political Scientists.