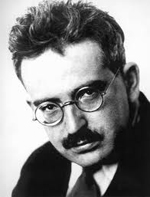 Syracuse Symposium continues its theme of “Memory-Media-Archive” with a two-day conference on the impact of the 20th-century German philosopher and social critic Walter Benjamin. Titled “Memoryscapes and Imageworlds: Archive, Architecture and Media after Walter Benjamin,” the program runs Oct. 31-Nov. 2 at Syracuse and Cornell universities. It is free and open to the public.

For more information and to register, contact Karl Solibakke, associate professor of German at SU, at 315-443-5823 or ksolibak@syr.edu. The registration deadline is Friday, Oct. 26.

“Walter Benjamin occupies a seminal place in the public humanities,” says Gregg Lambert, Dean’s Professor of the Humanities and founding director of the SU Humanities Center. “His work is regularly cited in academic and literary journals, and, more than 50 years after his death, continues to inform the study of language and cultural archives, images and non-print media, architecture and cityscapes, and bodies and objects.”

Benjamin (1892-1940) was a German-Jewish essayist who wrote extensively about technology, language, literature, the arts and society. Although he left behind a large amount of unfinished work, much of it has been published since the 1980s and has elicited considerable commentary. His most famous essay is “The Work of Art in the Age of Mechanical Reproduction” (1936), which continues to influence media theory and the study of film, architecture and art criticism.

The conference will focus mainly on another seminal work of Benjamin’s: “Passagenwerk” (“Arcades Project”). A collection of writings about city life in Paris, it is regarded as one of the leading examples of 20th-century cultural criticism.

“We’ll begin at Cornell with an in-depth exploration of the contemporary status of memory archives and the growing need to imagine new archival frameworks, networks and interfaces, as cultural and technological forces reshape the world,” says Solibakke. “The program concludes at SU with a comprehensive look at Benjamin’s writings on photography, images and urban and commercial spaces.”

The conference schedule is as follows:

Leslie Adelson, the Jacob Gould Schurman Professor of German Studies and director of the Institute for German Cultural Studies at Cornell University

Brigid Doherty, associate professor of art and archeology and of Germanic languages and literature at Princeton University

11:15 a.m.
“Towards the Apokatastatic Will: Media and Eschatology in Benjamin’s Late Work”
Michael Jennings, the Class of 1900 Professor of Modern Languages and professor of German at Princeton University

Noon
“Halacha and Hagada in Benjamin and Scholem”
Vivian Liska, professor of German literature and director of the Institute of Jewish Studies at the University of Antwerp (Belgium)

2 p.m.
“Benjamin and Atget”
Alexander Gelley, professor of comparative literature at the University of California, Irvine

“The Imperceptible Image”
Mark Hansen, professor and director of undergraduate studies in literature at Duke University

“Movies, Mourning and Melancholia in the Age of their Technological Reproduction”
Tom Gunning, the Edwin A. and Betty L. Bergman Distinguished Service Professor, professor art history, and professor of cinema and media studies at The University of Chicago

“Memoryscapes and Imageworlds” is co-sponsored by The College of Arts and Sciences’ Office of the Dean, as well as Graduate Programs at Syracuse Architecture at SU; and the Department of German Studies, Institute for German Cultural Studies and Society for the Humanities at Cornell.