‘Angels on the Border’ to be exhibited at La Casita; opening reception is Nov. 9 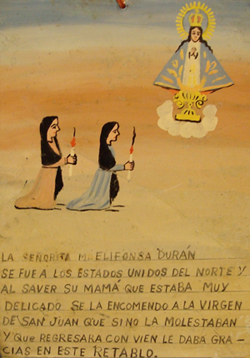 La Casita Cultural Center will present “Angels on the Border,” an exhibition of religious paintings commissioned by Mexican immigrants from 1912 to 1996. The opening reception will be 6-8 p.m., Friday, Nov. 9,  at La Casita Gallery, 109 Otisco St., Syracuse. The exhibition, which is free and open to the public, will continue through February 2013. Gallery hours are noon-6 p.m. Monday through Friday.

A discussion, led by Amy Lutz, associate professor of sociology in Syracuse University’s College of Arts and Sciences and the Maxwell School of Citizenship and Public Affairs, will be presented from 5:30-7 p.m. on Thursday, Nov. 15, at the La Casita Gallery.  The discussion is free and open to the public.

Created on tinplate, zinc, wood or copper, the Angels on the Border retablos typically portray the blessings of the Virgin Mary and the Trinity’s protection of immigrants in their struggles across the border. Retablos are traditionally created by professional retablo artists, immigrant relatives or the immigrants themselves and are displayed inside Catholic churches or in homes as a testament to a miracle granted or favor received. The works include text that describes the miracle, an image of the place where the miracle occurred and an image of the deity to whom the miracle is ascribed.

The exhibition was curated by the Mexican Migration Project at Princeton University, co-directed by Jorge Durand, professor of social anthropology at the University of Guadalajara (Mexico), and Douglas S. Massey, professor of sociology and public affairs at Princeton University.  A companion book, “Miracles on the Border” (University of Arizona Press, 1995), contains 40 color photographs and an analysis of 124 contemporary retablo texts. The book received the Southwest Book Award from the Border Regional Library Association, El Paso, Texas.

“Angels on the Border” is presented as part of the 2012 Ray Smith Symposium “Moving Borders: The Culture and Politics of Displacement in and from Latin America and the Caribbean.” The Ray Smith Symposium is enabled by a major bequest from the estate of Ray W. Smith ’21 to Syracuse University’s College of Arts and Sciences.