The Syracuse University College of Law Moot Court Honor Society will host the final round of the 35th Annual Lionel O. Grossman Trial Competition on Thursday, Oct. 18 in Syracuse at James M. Hanley Federal Building in the ceremonial courtroom at 5:30 p.m. This year’s final round competitors include law students Elizabeth Molino and Ivan Pavlenko as plaintiff vs. E. Pete Frick and Olivia Zaiya as defense. 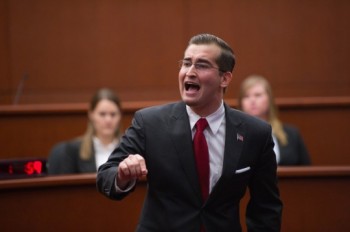 “In addition to observing the College of Law’s finest advocates, this year’s final round will be especially rewarding,” says Catherine Sinnwell Gerlach, a third-year student and executive director of the Moot Court Honor Society. “At the end of the competition, we will present the Frank H. Armani L’56 Advocacy Award. The award serves to acknowledge the duty all lawyers have to provide strong advocacy and ethical legal representation. In honor of Armani, who upheld this duty in the face of inconceivable opposition, this award is presented annually to the student attorney who best demonstrates these attributes throughout the Lionel O. Grossman Trial Competition.”

Armani stands as a role model for legal ethics and is widely regarded as a hero within the legal profession. In 1973, he made an immeasurable personal sacrifice during his representation of Robert Garrow, the defendant in the Lake Pleasant Murder case in Lake Pleasant, N.Y. He has received numerous awards, including a Distinguished Lawyer award from the Onondaga County Bar Association in 2006 and, more recently, a nomination for the Michael Franck Award presented by the ABA Center for Professional Responsibility. Armani will serve as an evaluator during the final round, and he will present the third annual Advocacy award.