Prof. Grant Reeher on the presidential debate: Game on!

Grant Reeher, professor of political science and director of the Campbell Public Affairs Institute in the Maxwell School, shared his reaction to the first presidential debate held Wednesday, Oct. 3, in Denver: 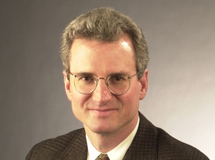 The bottom line from the debate is Game On.

The bar for Mitt Romney going in was to provide a plausible and reasonable alternative to an Obama second term, and he cleared that. He demonstrated command of the issues he wanted to push, was well-spoken and confident, and in fact for most of the evening took the fight to the president. And in addition to the effective use of talking points, he also demonstrated at times some nuance—for example, he dealt with his passage of the Massachusetts health care reform versus his criticism of the Affordable Care Act in an effective way. He also came across as more moderate, personable and engaging than he has seemed in the past.

President Obama’s performance was not bad, but he was more passive, and tended to take the role of responder, offering policy rebuttals and at times calling for more details about the alternatives being suggested by his challenger. He often let Romney have the last word and seemed content to let critiques go unchallenged when I thought a response or even a correction was in order. At other times he seemed somewhat irritated by Romney’s longer attacks, but strong counterthrusts were not forthcoming. Though he did not look at his watch as did George H. W. Bush in 1992, I nonetheless got the sense as a viewer that he really didn’t want to be there, while Romney seemed to relish the opportunity to make his case.

As far as the debate format itself, the open-ended structure was great if you’re someone who follows the campaign relatively closely. It provided a lot of substance and showcased the differences between their views and approaches, but it also placed a high demand on the voter to follow along and listen closely, as the candidates pivoted off the questions and each other’s statements to engage a wide range of topics under a single ostensible theme. At times this openendedness also encouraged the repetition of talking points.

More specifically on the content as it related to jobs and economy, I continue to be struck by the almost complete absence of any consideration of the nation’s poor. When one in six Americans—and one in four children—live below the poverty line, the exclusive focus on the middle class is worth noting.

On the whole, I’d say this was a good, substantive debate, which yielded a very good night for Mitt Romney. Prior to last night, the president was beginning to coast to the finish line. I suspect that will now change—it will be a more competitive contest from here to the end. Also look for a different performance by the president in round two.