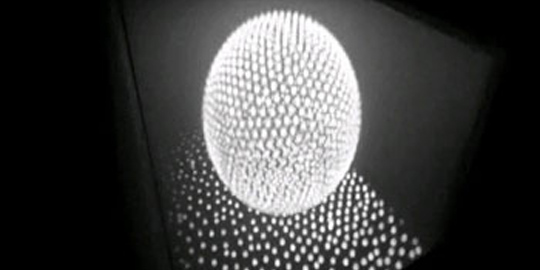 In a paper just published in Nature Materials, a team of researchers that includes Syracuse University physicist Mark Bowick has succeeded in creating a defect in the structure of a single-layer crystal simply by inserting an extra particle, and then watching as the crystal “heals” itself. The trick to self-healing is that the crystal must be curved.

This effect, which carries important implications for improving the conductivity of electronics and other realms of materials sciences, was predicted six years ago by Bowick, professor of physics in SU’s College of Arts and Sciences, along with David Nelson, Homin Shin and Alex Travesset, in research supported by the National Science Foundation, which also funded this new study.

In order to prove their prediction experimentally, Bowick sought out Paul Chaikin, professor of physics at the Center for Soft Matter Research at New York University. Chaikin enlisted the help of his post-doctoral student, William T.M. Irvine. All three researchers specialize in a branch of materials science called “soft matter,” which studies a wide range of semi-solid substances such as gels, foams and liquid crystals.

Bowick described the clear, thermodynamically stable and completely uniform liquid mixtures (or soft matter microemulsions) he works with as being similar in physical structure to a mayonnaise-based ranch dressing. “Mayonnaise is made from a mixture of olive oil and vinegar, which is essentially water,” he explains. “You have to beat the ingredients for a long time to disperse tiny droplets of the vinegar in the oil to make an emulsion.”

But keeping so many droplets mixed evenly throughout the oil requires the presence of a surfactant, a stabilizer that is equally happy in both the oil and the water. “In ranch dressing, the surfactant used is ground-up mustard seed particles, which arrange themselves at the interface between the water and the oil,” Bowick says. “The particles collect on the surface of the water droplets.”

The researchers emulated ranch dressing in order to study curved crystals. They added microscopic acrylic glass particles to an emulsion of glycerol droplets (representing water) mixed in a base of oil. Like the mustard seed, the glass particles naturally collect on the surface of individual glycerol droplets. Depending on the experiment, somewhere between 100 and 10,000 particles coat each droplet. The particles’ positive electric charges repel each other, causing them to arrange themselves naturally in a honeycomb pattern, with each particle equally distant from six others.

But, the regular six-sided pattern doesn’t fit perfectly around the spherical droplet, any more than gift-wrapping a soccer ball results in a perfectly flat paper covering. Just as the paper wrinkles when molding it to the surface of the ball, the curved crystal pattern generates 12 defects, or scars, evenly spaced around the sphere. The number and location of these scars is a fundamental structural property prescribed by the geometry of the sphere. A similar pattern can be seen on the leather cover of the soccer ball, which requires 12 five-sided pentagons (defects) evenly spaced within an overall six-sided pattern.

Bowick was a member of the team that originally discovered this 12-scar property of curved crystals in 2003. After that, he wondered what would happen if they added an extra particle, called an interstitial, right in the middle of the crystal.

“Even though the particles have self-organized into a crystal pattern, they are still free to wiggle about within that structure,” Bowick says. “You’d expect that an additional particle would just push the other ones apart slightly and settle in place, as it would on a flat surface.” The result would be a defective pattern containing an area of seven-sided and five-sided shapes, rather than the regular six-sided hexagons. But what Bowick and colleagues predicted using computer models is that on a curved surface, an extra particle added halfway between two scars would create a defect in the pattern that splits into two parts.

They calculated that the strain on the crystalline structure caused by these two defects would “flow” away from the site, like ripples on a pond, as the particles readjusted their distances from one another. Eventually the defects would migrate to opposite scars, where they would disappear. Amazingly, the scientists accurately predicted that the interstitial particle’s mass would remain close to where it was placed, and large areas of the hexagonal pattern would have rotated slightly—about 30 degrees. But the original defect would be gone. To prove this remarkable result experimentally, however, required a special instrument.

“For this project, we had to figure out how to add a particle to the curved crystal, while imaging the particles as they shift around in three dimensional space,” explained Irvine, who is now at the University of Chicago’s James Franck Institute. “This makes the experiment considerably more complicated.”

Irvine planned to use optical tweezers to grab a microscopic particle from the surrounding emulsion and place it on the surface of a droplet using radiation from a focused laser beam. “In most experiments, you come in with the laser ‘tweezers’ using the same lens as you use for imaging the particle, and that’s great because you want to focus the beam on the same plane where you’re looking,” he says.

But for this experiment, the laser tweezers and the microscope had to be separated. “A confocal microscope selects a very thin slice of the object to be imaged, so that one slice is in focus and the rest of the image (before and after) is out of focus, like a photo of a person with their face in focus and the background blurred,” Irvine explains. “In order to create a full three-dimensional image, you move the objective up and down and bring the different slices into focus one at a time.”

But moving the lens also moves the laser beam holding the particle. “In order to hold on to a particle and watch what happens as you gradually bring it to the surface of the droplet, you have to essentially build a second microscope on top of the first one,” Irvine says. “Technically, that’s not trivial—you have to get a lot of things to work at the same time.” But once Irvine had designed and built the instrument, the team tested Bowick’s predictions and actually created video images showing the defects moving across the crystal surface and disappearing into the scars.

Irvine was recently awarded funding from NSF to build an improved version of the instrument at the University of Chicago. This will hopefully lead to further research and development of many self-healing materials.

“The study of crystals on curved surfaces is interesting and important for systems that range from geodesic domes to viruses to Buckyballs,” Paul Chaikin said. “The defect structure and the ‘healing’ of defects are particularly important in the conductivity, heat and mechanical properties of carbon nanotubes, graphene and similar materials.”

“Graphene, a two-dimensional sheet of carbon molecules, is a very strong material and a good conductor of electricity,” says Bowick. “However, there are always going to be defects that will decrease its conductivity. Ultimately, for electronic devices, you want graphene with high conductivity and as pure as possible.”

And that’s where the researchers’ discovery could prove an ideal solution. “You might be able to simply flex a piece of graphene, remove the defects, and improve its conductivity,” Bowick says.