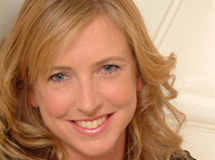 Ocean rower, adventurer and environmental campaigner Roz Savage has been added to the schedule of distinguished guests who will share their diverse global experiences and perspectives with the Syracuse University and Central New York communities as part of the 2012-13 University Lectures series. Savage will speak on Feb. 27, 2013. Additionally, dates have been changed for Next Generation Nepal founder Conor Grennan (now March 5, 2013) and award-winning playwright and screenwriter David Henry Hwang (now April 4, 2013).

The ocean has forced Roz Savage to develop courage, tenacity, perseverance and the strength to transcend self-imposed limits. In her lecture, she will share her insights on life purpose, motivation, spirituality and sustainability. The 2010 National Geographic Adventurer of the Year, Savage holds four world records for ocean rowing, including one as the first woman to row three oceans: the Atlantic, Pacific and Indian. She has rowed more than 15,000 miles, has taken around 5 million oar strokes and spent cumulatively more than 500 days of her life at sea, alone in a 23-foot rowboat.

Savage uses her ocean rowing adventures to inspire action on the top environmental challenges facing the world today. A latecomer to the life of adventure, Savage worked as a management consultant in London for 11 years. Since embarking on her first solo ocean adventure in 2005, she has braved 20-foot waves, capsized three times in 24 hours and faced death by dehydration when both her water makers broke. She has encountered whales, dolphins, sharks and turtles, and admired the timeless beauty of sunrises, sunsets and star-filled night skies. Savage has spoken across six continents.

She is a United Nations Climate Hero, an Athlete Ambassador for 350.org and an ambassador for the Blue Project. In 2011, she received the Ocean Inspiration through Adventure award. She is the author of “Rowing The Atlantic: Lessons Learned on the Open Ocean” (Simon & Schuster, 2010). A documentary based on her Atlantic row has toured the world as a finalist in the Banff Mountain Film Festival.

All University Lectures begin at 7:30 p.m. in Hendricks Chapel and are free and open to the public. Sign language interpretation and CART are available for all lectures. The 2012-13 schedule is as follows:

Wednesday, Oct. 10—Bill McKibben, environmentalist, author and founder of 350.org, speaking on “350: The Most Important Number in the World.” This lecture is sponsored in cooperation with the Syracuse Center of Excellence.

Tuesday, Oct. 23—Ron Brownstein, political director of Atlantic Media Co., editorial director and columnist for the National Journal, speaking on “American Politics, Today and Tomorrow.” This lecture is sponsored in cooperation with the S.I. Newhouse School of Public Communications and the Maxwell School of Citizenship and Public Affairs.

Tuesday, Nov. 13—Marion Nestle, Paulette Goddard Professor of Nutrition and Public Health at New York University and author of “Food Politics” and “What to Eat,” speaking on “Food Politics from Farm to Table: A Recipe for Change.” This lecture is sponsored in cooperation with the Department of Public Health, Food Studies and Nutrition in the David B. Falk College of Sport and Human Dynamics.

Tuesday, Feb. 27, 2013—Savage, speaking on “The Human Condition: An Ocean Rower’s Perspective.” This lecture is sponsored in cooperation with the Department of Sport Management in the David B. Falk College of Sport and Human Dynamics.

Tuesday, March 5, 2013— Conor Grennan, founder of Next Generation Nepal, speaking on “Little Princes: Changing the World through Volunteering and Storytelling.” This lecture is sponsored in cooperation with Hendricks Chapel and the College of Visual and Performing Arts.

Tuesday, March 19, 2013—Jim Richardson, National Geographic photographer, speaking on “Our Vanishing Night: Light Pollution.” This lecture is sponsored in cooperation with the College of Visual and Performing Arts.

Thursday, April 4, 2013— David Henry Hwang, Tony Award-winning playwright and screenwriter, author of “M. Butterfly,” speaking on “The Fluidity of Identity: Theatre and the Search for Self.” This lecture is sponsored in cooperation with Pulse, the LGBT Resource Center, the College of Visual and Performing Arts and the Humanities Center.