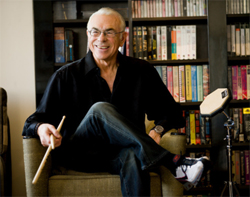 Rosen’s lecture is sponsored by CNY Jazz; the Janklow Arts Leadership Program in Syracuse University’s College of Arts and Sciences; and the Department of Music and Entertainment Industries in the Rose, Jules R., and Stanford S. Setnor School of Music in SU’s College of Visual and Performing Arts.

“We are thrilled to partner with Syracuse University to present one of the music industry’s most extraordinary pioneers,” says Larry Luttinger, founder and executive director of CNY Jazz. “Larry Rosen has spent his career bringing quality jazz to the masses, while keeping a finger on the pulse of technology and media.”

Rosen’s visit coincides with the 30th anniversary of GRP Records, which he founded with award-winning pianist/composer Dave Grusin, and with the fifth anniversary of Rosen’s “JAZZ ROOTS,” which Quincy Jones calls the “most important new concert and educational jazz series in America.”

Rosen has served as producer or executive producer of more than 350 albums, of which 80 have been nominated for Grammy Awards and 33 have won. He also has produced numerous award-winning film/video productions and television specials.

It is Rosen’s work with GRP for which he is perhaps best known. The self-proclaimed “Digital Master Company,” GRP was the first non-classical label to embrace all-digital recording, thus paving the way for the worldwide CD movement.

Equally important, says Mark Nerenhausen, professor of practice and founding director of the Janklow Program, is the fact that GRP was the first label to market itself as a lifestyle brand.

“Larry Rosen has a special relationship with music fans,” says Nerenhausen. “This approach pays huge dividends, artistically and financially. Today, GRP is one of a handful of labels that have leaped into the digital age, while making music that is fresh and relevant.”

Many of these artists are featured on “GRP 30” (Universal Music, 2012) a two-disc retrospective coming out this fall in conjunction with GRP’s 30th anniversary. To mark the occasion, Rosen is also re-mastering 10 classic GRP albums, as well as mounting a series of live shows with label alumni.

Also a champion of music education, Rosen has recently channeled his energies into “JAZZ ROOTS.” To date, the series has featured more than 100 performers, sold more than 100,000 tickets and benefited some 10,000 students nationwide.

“I believe it is extremely important that young people get to understand the history of America’s music and its roots, especially today when music education has been almost eliminated from our public school system,” he says.

Rosen has earned numerous honors and awards, including Ernst & Young’s prestigious “Entrepreneur of the Year” Award in New Media and Entertainment and the National Association of Recording Arts and Sciences’ Governor’s Award. He serves on multiple boards, and with Grusin, established the National Foundation for Jazz Education.