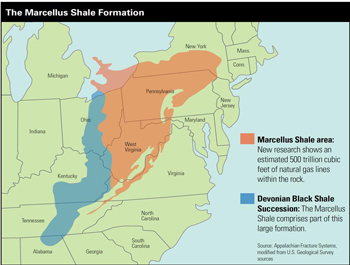 Mary Beth Jones of Apalachin, N.Y., lives near “ground zero” of the hotly contested hydrofracking debate swirling across New York State. Her land sits above the gas-rich Marcellus Shale, and like many of her neighbors, Jones is concerned about risks of groundwater contamination associated with hydraulic fracturing. That’s why she’s agreed to be part of a Syracuse University study that aims to develop new tools to detect possible groundwater contamination associated with shale-bed methane production in the Appalachian Basin.

“Clean water is very important to me and should be very important to everybody in the country,” Jones says. “This project allows people like me to have our water tested by independent researchers at no cost. I’m very pleased to be part of the study and to have the testing done by a credible university.”

Project SWIFT (Shale-Water Interaction Forensic Tools) was launched during spring 2012 by researchers in the Department of Earth Sciences in SU’s College of Arts and Sciences in response to the public debate over hydraulic fracturing in New York State. Project SWIFT is the first project of its kind in the state.

“Last fall, there seemed to be daily news stories focused on the public debate over fracking and water quality,” says Gregory Hoke, assistant professor of earth sciences and co-founder of Project SWIFT. “Lacking in the debate was independent data about natural water quality. I thought we could help fill the void, by collecting water quality data and putting it on the web so that communities can make informed decisions based on an independent, objective data source.”

Hoke and Associate Professor Laura Lautz worked with their colleagues Professor Donald Siegel, and Assistant Professor Zunli Lu to launch the project, which is jointly funded by The College of Arts and Sciences and SU’s Office of the Provost. The project aims to:

The first step is to assess the natural variability of water quality in the Southern Tier. To do that, the researchers selected wells based on a list of those drilled since 2000 compiled by the New York State Department of Environmental Conservation. A team of graduate and undergraduate students contacted landowners, educated them about the project, obtained permissions to do the testing and then worked with the landowners to obtain water samples. Much of that work was accomplished during the spring and summer of 2012.  The water samples are now being tested in SU laboratories.

“Not all well water in Upstate New York is of high quality,” Lautz says. “We need to document the range of chemical compounds that are naturally found in water so we can tease out what is unnatural. It’s a really hard thing to do.”

The researchers are analyzing flow-back water to uncover unique chemistry not found in well water. For example, salt is found in both flow-back water and well water and therefore is not a clear indication of hydrofracking contamination. In contrast, iodine may be an ideal geochemical fingerprinting tool for contamination. Deep groundwater in shale, which is brought to the surface as flow-back water during hydraulic fracturing, has very different iodine content and isotopic composition compared to water found in family wells, which tap the relatively shallow water table.

“We have unique expertise at SU to measure iodine in water,” Lautz says. “Flow-back water brings a specific isotopic composition of iodine to the surface. There is no other way to bring iodine-rich waters to the surface except through fracking.”

The next steps for the project include looking for other geochemical tracers in flow-back water that could be used to monitor cross contamination. The researchers are looking for additional funding to support testing landowner wells throughout the year to determine if water quality changes across the seasons. The researchers would also like to broaden the project to include more wells across the Southern Tier. They are currently collecting names of people who want to be part of the project pending additional funding.

“The state moratorium on fracking puts us in a unique position to collect this data and establish a baseline for naturally occurring water quality pre-hydraulic fracturing,” Hoke says. “Water quality data is collected by gas companies, but the data is not accessible to the public. We want to develop a public resource that can be used to evaluate and monitor water quality.”